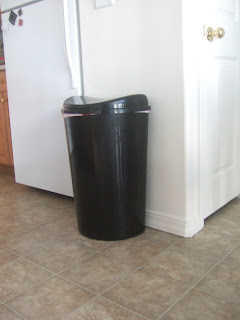 Today I decided to make a roast for a couple of my girlfriends that just got married. While Jeff and I were at Winco I told Jeff to run and grab a roast while I grabbed a few other things. Never ever ever allow your husband to grab the roast for dinner.
So let me explain how it all started!
This morning I called my sister Rachel for advice on how to cook a roast. I have cooked one before but I don’t cook them everyday so I needed a little reminder. She told me to thaw it and put it in the crock pot on low for around 4 to 5 hours. So that is what I did. I grabbed it, threw in some warm water and didn’t even glance at it.
I came back 20 minutes later to throw it in the crock pot. I unwrapped the clear wrapping and noticed the words PORK ROAST on the cover. I didn’t really think that much about it especially since it looked like a normal roast on the front.
So I grabbed the roast and proceeded to put it in the crock pot when I felt something really hard on the bottom of it. I turned it over to see what it was.
There was a thick strip of SKIN still on the meat! I died! I mean literally I had to compose myself a million times to try not to throw up!
I even had enough composure to take a dull knife and slowly try to cut the skin off! 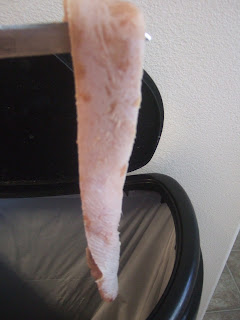 Until I saw the little HAIRS on the skin! (by the way just telling the story now makes me gag)
I grabbed the skin with my bare hands, opened the lid to the garbage, closed my eyes and tossed it in. After I closed the garbage lid I did a funky grossed out dance in my kitchen! That started the “talking to myself” phase that I went through the whole day.
“Sadie, just use the rest of the meat…it’s fine…no harm done…just put the roast in the crock pot and walk away.” OINK OINK OINK OINK…I am not kidding you when I tell you that I could hear the PIG that was in my garbage!
I kept thinking to myself…Oh my gosh! I’m a flippin’ butcher! I just cut SKIN OFF OF A PIG! FOR THE LOVE!!! Then the talking to myself started again…”Why didn’t you just throw the stupid thing away Sadie…you had to think bout the starving people in Africa and cut skin off some nasty meat! All to save a half a pound of PIG MEAT!”…”Just do it…just put the rest of the roast in the crock pot…I don’t have to eat it! No one will know that just a couple hours before I butchered it” 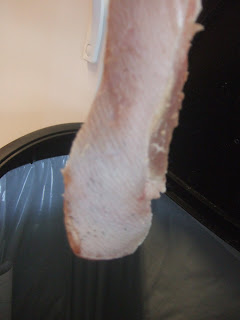 So that’s what I did. I put the rest of the roast into the crock pot. Washed my hands for 5 minutes and grabbed my purse. 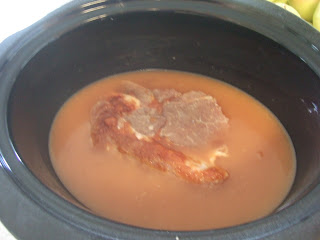 I was off to the store to grab some more roast! Yeah…don’t worry cause I thought the roast was big enough to feed six people! Well guess what…it wasn’t big after I cut the skin off!
This was the look on my face the rest of the day! As you can see by my lack of dress and grooming…I was not planning on going out today.
But this was an emergency. So I opened the front door, took a big breath in and stepped out to Rexburg Land to find me some more roast! 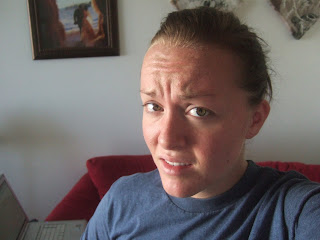 Oh Broulims! How you never cease to amaze me…with you wonderful overpriced food and your friendly, upbeat employees. What ever would I do without you. You all thought that the best part of this story was already told! You thought that 30 minutes in H#$% was already over didn’t you! WELL THINK AGAIN, because I am just getting started!
On my way to the store I called my husband to tell him the horrid story.
You wanna know what he said to me!!??!!
“COOL!!!…LET’S NAME IT WILBER!”
I hung up the phone. 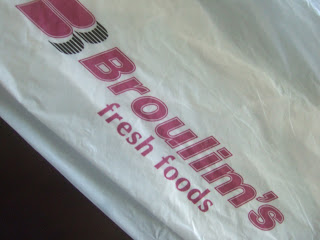 I walked into Broulims with the kind of fast walking you see mothers do at 6 in the morning around the park. I was determined to not allow anyone to see me! I headed straight for the meat section.
Due to my lack of cooking experience the meat section is as foreign to me as a Brazilian Rain Forest. I mean who would have thought there would be so many different cuts, shapes, sizes, even COLORS of meat. Don’t get me wrong I have bought meat before but today I already felt like the meat had won! While I was slowly walking up and down the refrigerated aisle trying my hardest to just look at the names of the meat instead of the meat itself I felt as if all the meat was staring at me! Straight in the face! It’s like they all knew I had Wilber in my garbage! The aisle felt 5 miles long but I finally reached the section of ‘roasts’.
“Ok Sadie find something without skin…that’s all you need…then you can walk outta here like no one saw you.”
Perfect there it is.
I thought to myself as I was looking straight at a perfectly packaged POT ROAST!
Ok just what I was looking forrr…..ummmm what the CRAP is on my hand?
Don’t worry because the bottom of the package had blood all over it!
Not just a drop but my hand was literally DRIPPING with yummy cow blood.
I have to add something here or else everyone that reads this is going to think I am some city girl! I grew up on a ranch! I castrated bulls, shoveled horse and cow shiz and branded cattle all while growing up. But when your dealing with blood and pig skin in your city 700 square foot apartment it becomes a whole other story!
Apparently pig skin wasn’t enough for me to come in contact with today!
I tried to compose myself yet again…and slowly put the roast down where I found it. (Even through all I wanted to do was throw it across the store, sit down on the ground and cry!)
I put a smile on my face (a fake one of course) and grabbed another roast that had no blood on the bottom. 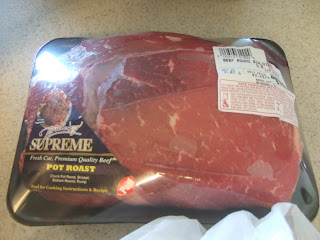 At this point I was ready to never cook meat again but I had a job to do and I was going to get it done!
So I went to a check out stand to a lady that I was sure I didn’t know.
This is how are conversation went.
I will call my check out lady Julie!
Sadie: “Umm I am not sure you want me to put this down…it has some blood on the bottom of it.”
Julie: “Oh no worries dear.” (She grabbed the package from me like she was grabbing a football to make a touchdown. She apparently had dealt with bloody packages before. She just acted like it was no big thing and threw it in the bag.)
Julie: “Would you like some hand sanitizer?”
Dang…these bagging ladies are prepared! OK do I say no to her and make her think that I like to have bacteria crusted hands…or do I take it and rub it into my hands along with the blood that is already there to make it so it would be all over my hands?…Sadie just take the hand sanitizer for the love! Why are you making this such a big deal! You get human blood on you all the time!
But I was convinced it was different. It had to have been the pig skin that threw my over the edge
Sadie: “Sure I would love some.”
What is that sound?…is that singing I hear?
I turned around to see a bag boy with some pretty awesome glasses singing his lungs out to “POPULAR” from Wicked.
This wasn’t like some quiet humming sound that you hear as you pass by someone…NO this was full out, lungs filled, show tune loud enough for all the store to hear singing!
The bag boy caught me looking at him but did he stop..?..What do you think?…He tilted his head in kinda a flirty creepy kinda way, shot a huge smile back at me and continued to sing his heart out.
I slowly turned my head back to the cashier…let out a big sigh and thought to myself…
Only in REXBURG!
Julie: “Ok that will be $32.50!”
Sadie: “THIRTY-TWO FIFTY!?”
I was so confused! There was no way the roast had cost that much!
Julie: “Oh dear, look at that…I scanned the hand sanitizer a few times! I must have done that while I was letting you use it. It will only take a few minutes for me to get that off of there”
Oh JULIE JULIE JULIE! Bless your little heart! You sweet lady with the heart embroidered pendent and the gray powdered hair! If you only knew….
I took another deep sigh and swiped my debit card.
Julie proceeded to hand me my receipt (I felt like everything was going slow motion…I don’t think she could have handed me my receipt any slower)
Some other old lady behind me: “Well hello Julie! How are you today?”
Julie: “Oh hello Beth!…how is your quilt coming along?” (Saying this as she glances to the lady coming in behind me)
WHAT?…who is beth…wait…give me my receipt! Why aren’t you handing it to me! FOR THE LOVE don’t stop ripping it from the machine! KEEP GOING!
I (yet again) took another deep sigh and PATIENTLY waited for Julie to finish talking about cross stitching with Beth. Meanwhile the show tune guy behind me and moved on to SINGING IN THE RAIN with VIBRATO!
I am pretty sure Julie forgot about me because I went to grab my bags and…
Julie: (GASP)…”Oh dear I am so sorry! Here is your receipt have a great day!”
Sadie: “Thank you!”
This time my smile was for real! I walked faster outta there then I did when I came in! I felt like I should have run out with my hands waving above my head like a horror movie! It was like I had just stepped foot into an old Twilight Zone movie.
I jumped into my car and took my final sigh!
I got home and now I felt like I was walking into a new horror film! The film would be called “The Living Pig.” I walked into the kitchen with my eyes never leaving the garbage!
OINK OINK OINK OINK!
WILBER was still alive I swear!
I decided it would be better for my sanity to throw the whole thing out.
It felt good to start off fresh with skinless, hairless meat! 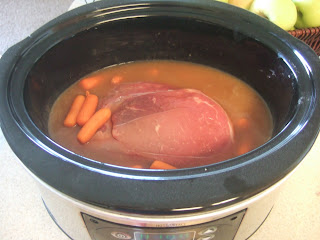 Jeff came home and the first thing he said to me was…
“How’s Wilber?” 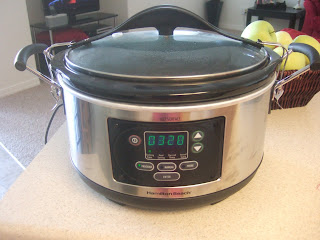 I will be haunted forever!
0 Shares
« EISF
Canning some peaches… »