It's here! It's here! My brand new APP! Get the app
Since Jeff has started Crossfit he has seriously wanted to change the way he’s eating.
He’s been wanting to cut out the late night milk shakes and a lot of the carbs!
Specifically he’s been researching the PALEO diet which is also known as the cavemen diet!
I did a modified version of this diet during the summer before I got pregnant and now we strive to eat ‘paleo inspired’.
Jeff is trying the PALEO challenge which consists of only eating meats, fruits, vegetables and nuts…pretty much anything that can be killed or harvested/planted.
My philosophy is not necessarily paleo but more just ‘healthy eating’ since I need the dairy and grains during pregnancy.
Since Jeff has been working on his diet…he has also been wanting to help in the kitchen!!
AMAZING!
He called me yesterday and told me to take some salmon out of the freezer and that he was going to make some Paleo inspired salmon! Once we got to cooking he showed me the recipe he wanted to use…
I noticed that we didn’t have half of the ingredients needed…
he decided to wing it and make his own creation!!
JEFF’S SALMON THAI CREATION!
2 Salmon fillets
1/2 can coconut milk
1 tsp ground cumin
1 tsp ground coriander
1 tsp onion salt
1 tsp garlic powder
1tsp pepper
1/2 cup slivered almonds 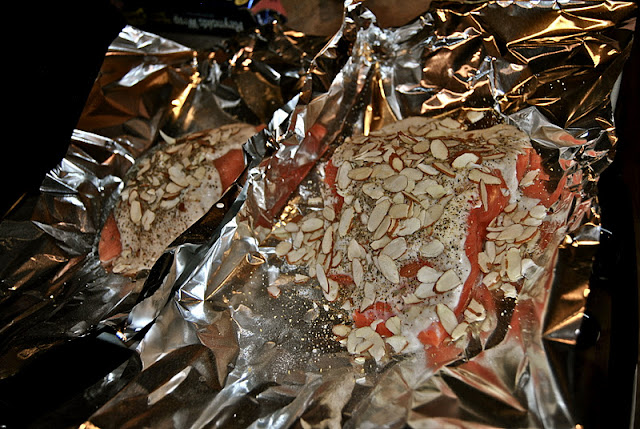 Preheat oven to 350 degrees
Place the de-boned, thawed fillets on 2 separate pieces of tin foil that have been sprayed with cooking spray.
Next mix your coconut milk, cumin and coriander together and place the sauce on top of the salmon…dividing it evenly between the 2 fillets.
Sprinkle remaining ingredients over sauce. 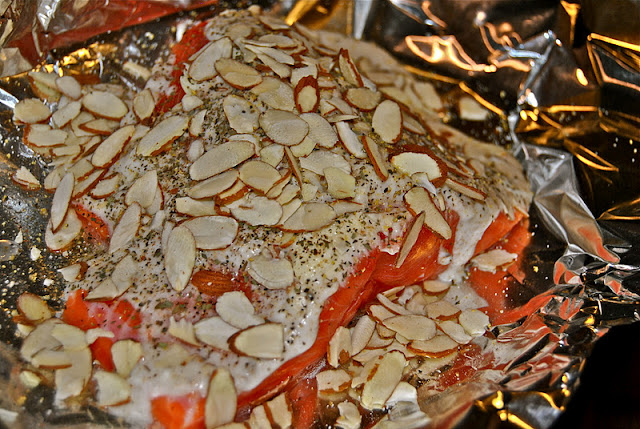 Wrap the tin foil like you would for a tin foil dinner and place on a cookie sheet. 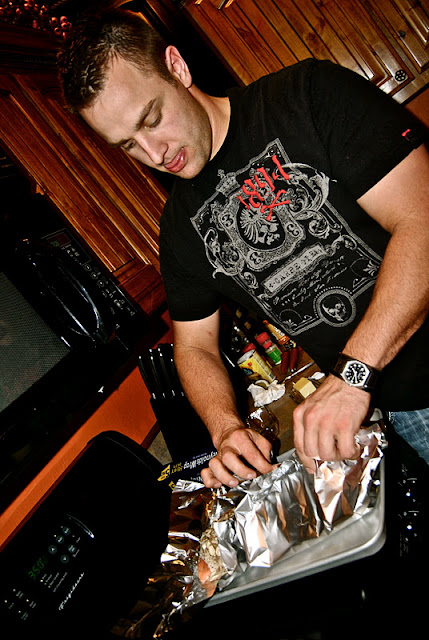 Let bake for about 20 minutes for your salmon to be completely done.
(I like my salmon almost dry)
Jeff started cooking noodles before I could remind him that noodles weren’t paleo…BUT the meal would have been perfect if not better with a side of broccoli instead of noodles!! 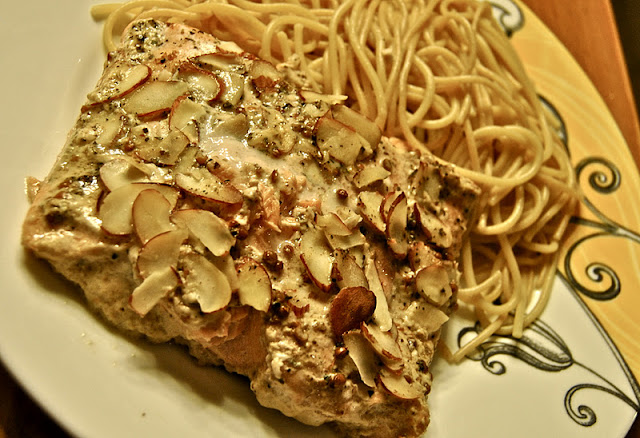 I sprinkled some lemon juice on my salmon to finish it off and it was PERFECT!!
A light but filling dinner that was full of flavor yet super healthy!
I think Jeff needs to wing it in the kitchen more often!!
XOXO
0 Shares
« Sunday outfits and love notes!!
Caught in the act!! »