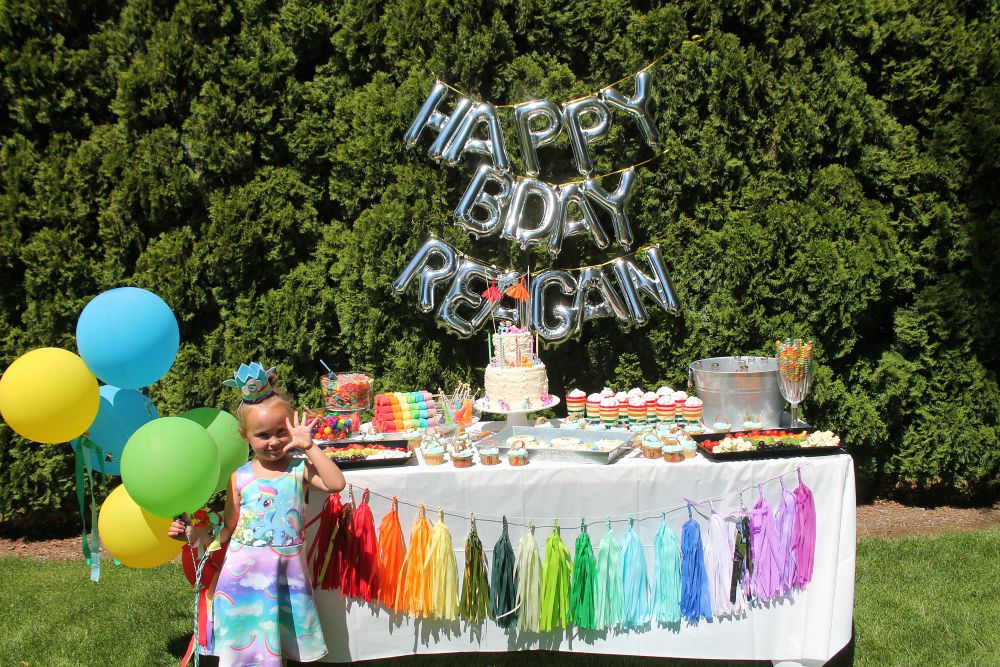 First, I have to give mad props to all those party planners out there. Planning a party was a lot of work but it was ALSO so fun to plan…kind of like a PARTY! (see what I did there) I’ve done one other kind of party thingy when I threw a sprinkles party for Baylor …other than that, I haven’t thrown a big party before! I have been dying to throw an over-the-top fun themed party for so long and I finally did it! I felt it was very appropriate that my first rodeo at party throwing was a PONY party! (…keeping the puns coming) but for reals, rainbows and ponies! What could be better??? I had no idea where to start or what I was doing but, I love baking and decorating, so put those things together with some spastic crazy kid games and you’ve got yourself quite the party. 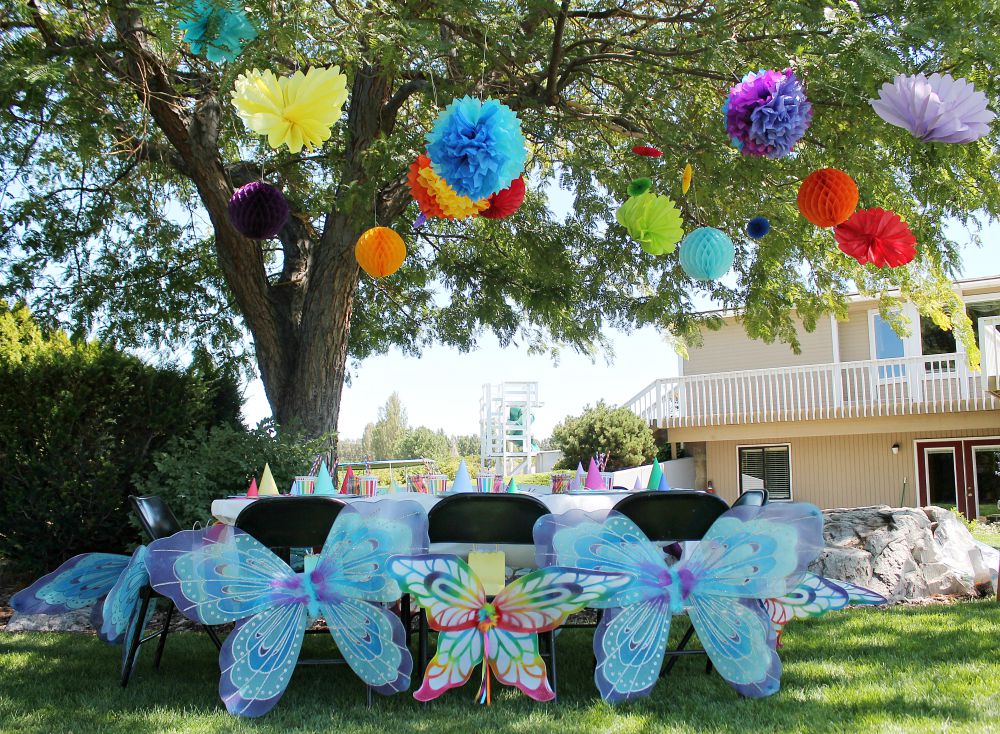 Don’t worry you guys, from one first time party planning mama to another…you’ve got this! Let’s just start from the beginning and I will break it all down for yea!

DESSERT TABLE… umm yes please! Who else just LOVES to bake…talk about the most therapeutic thing on the planet.

Did you know that like at least 300 other people have thrown My Little Pony/Rainbow Dash parties, AND they are all documented on Pinterest. Like ALLLL of them. SO, when I started to write down what I wanted on the dessert table I just looked up all the rainbow foods and My Little Pony/Rainbow Dash foods. If you are wanting to specifically throw a Rainbow Dash party, you have way more wiggle room to be more creative with food. I just committed to the rainbow goodness and went all out! 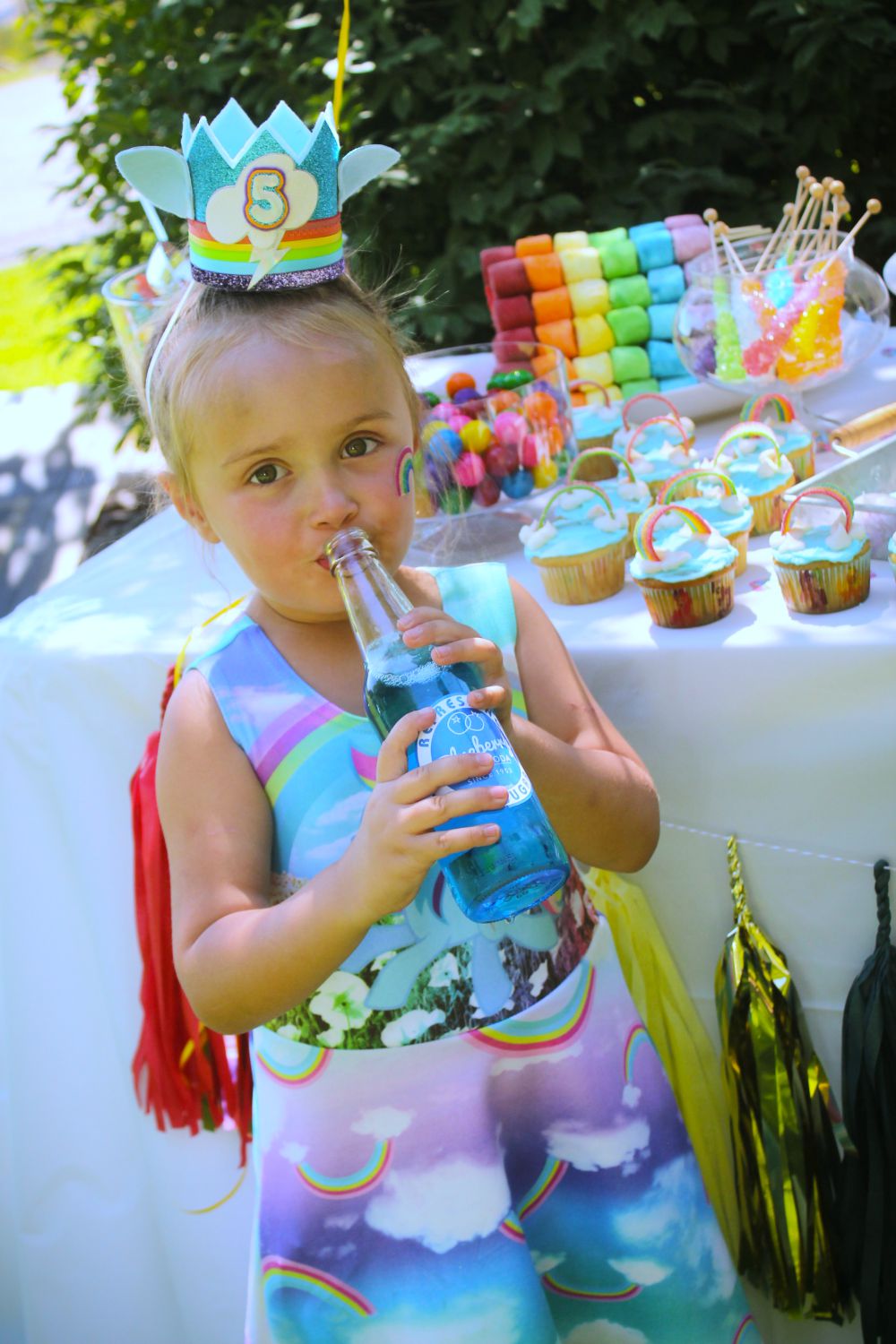 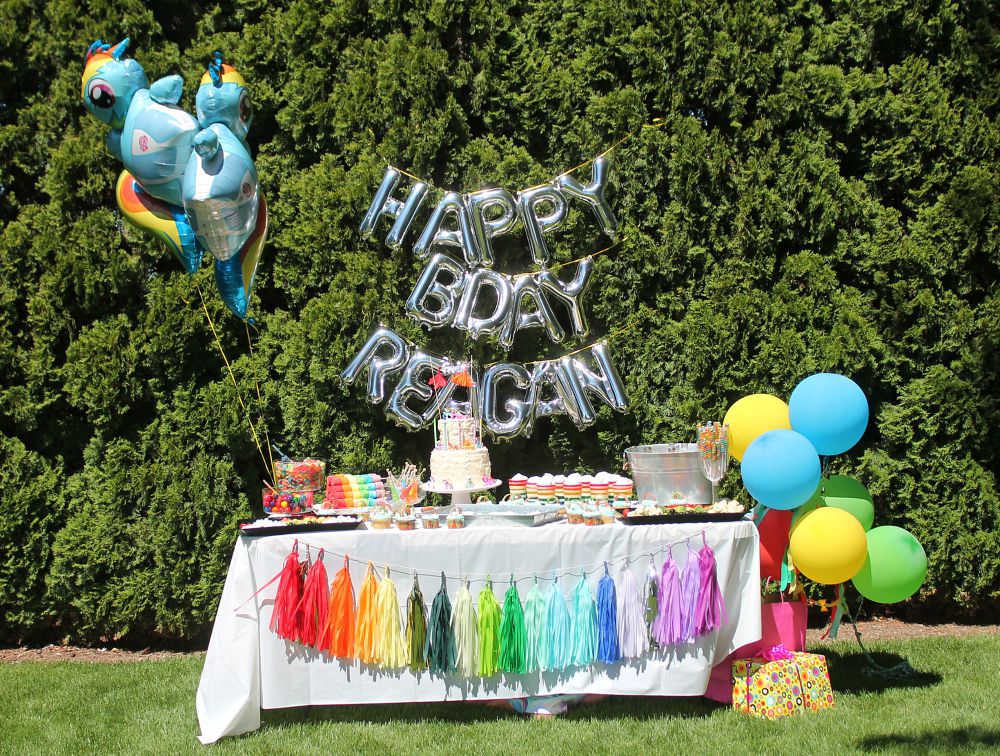 Let’s start with the cake. Oh the cake! Can I get an amen for rainbow layered cake… an amen and an Advil?! It takes so much time to divide the batter, color it, shave off the top, and perfectly frost in between each little layer, but cutting into the cake and revealing a fun surprise to my little Reagan Jane is always worth it! I bought the little figurines on top of the cake at Walmart from the individually packed surprise bags. You know what I am talking about right? They are in the My Little Pony section and about $3 a piece. (just a little hint…there is a tiny clear spot on the top of the package that you can push the figurine up to see which figurine you are buying so you don’t buy the same one twice!!) tricky tricky 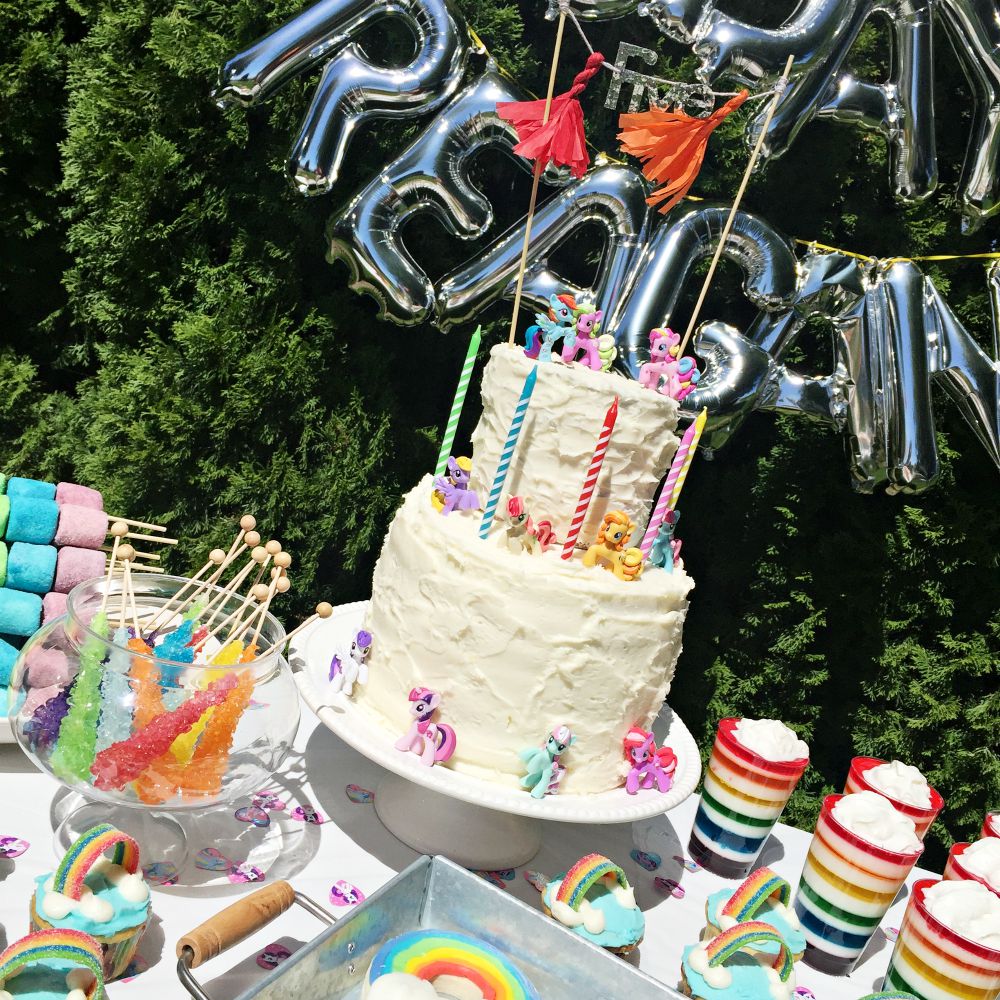 As for the candles, I got them at ZURCHERS, like pretty much every other thing at this party… HUGE party hint: you want your party to be cute and fun and STRESS FREE? Shop for everything at ONE STORE! hi.

AND…as for the TOP of the cake, guess what… it is FAKE! Like for reals! I got the “cake dummy” AND the adorable tassel cake topper from the extremely beautiful etsy shop GLAMFETE! Please go check out the other amazing cake dummies that she has, I am serious, I’ve never seen anything like them! So so cool! I just frosted mine to match the color of my frosting and placed it on top of the real cake. NOW it’s like I’m a fake legit cake maker or something! But really, doesn’t that extra layer add so much goodness! 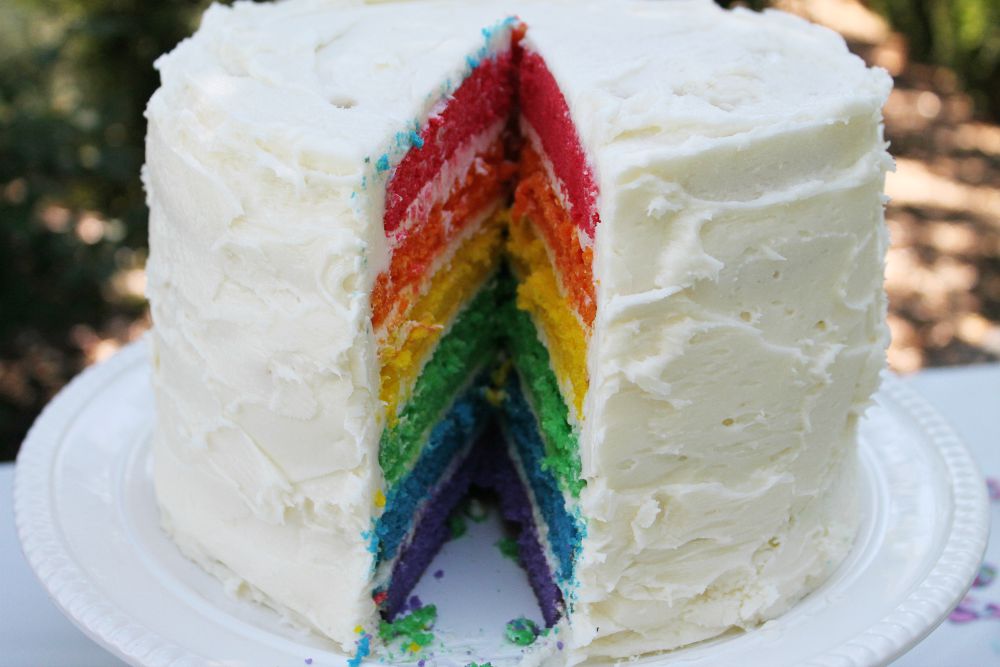 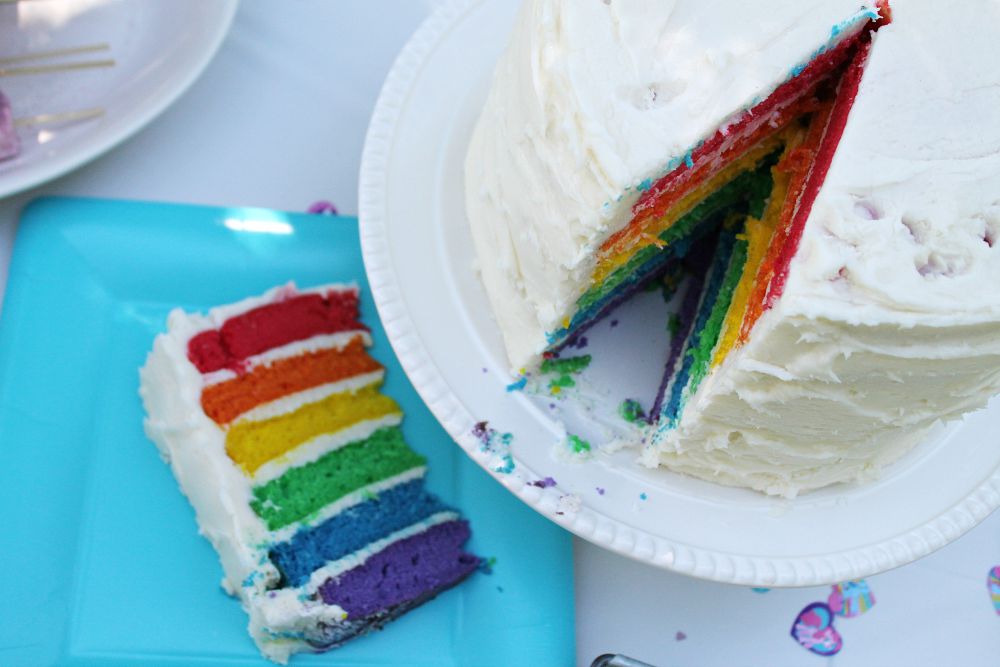 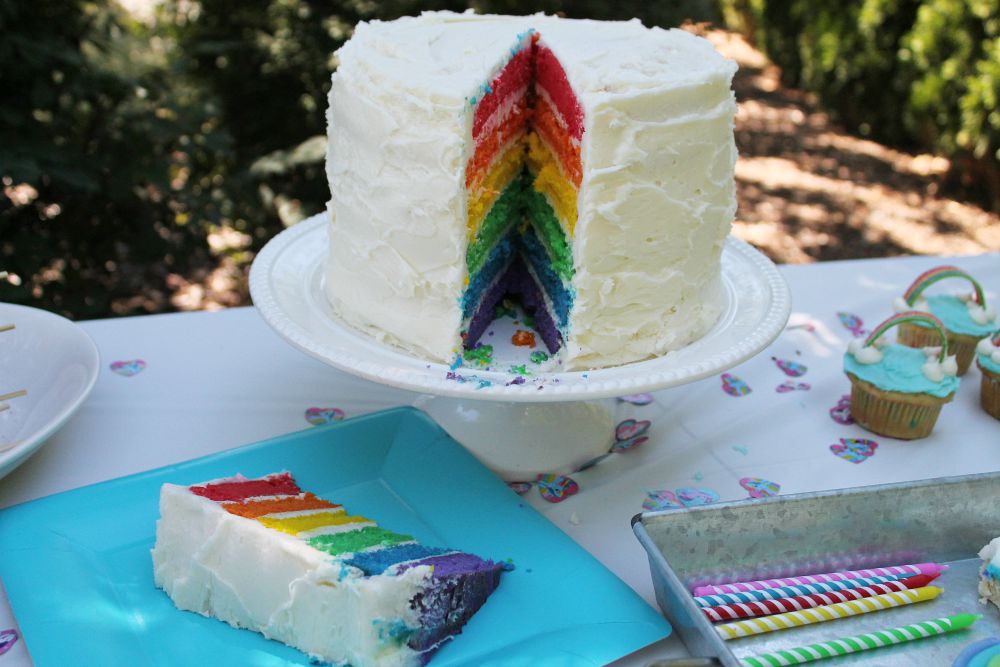 Now, let’s get to the other yummy treats on the table!

Those rainbow marshmallows are literally just marshmallows dipped in water and then dipped in JELLO! Like for reals… JELLO mixes people! Who knew! I showed EXACTLY how to do these on my snapchat (SIMPLYSADIEJANE) so if you didn’t see it or you don’t follow me? TOOOO BAD… you missed it. Okay, JK.

All you do is this:

dip the mallow in the water

throw or chuck or lightly drop the mallow into the bag

zip the bag up and shake what yo mama gave yea!

open the bag, grab the mallow, and place it on some parchment paper until it is dry

Then layer all the mallows in the rainbow order and BOOOOM you’ve got yourself a PEEP on STERIODS!

(if you use the 6 ounce boxes of jello, you can make like 12 mallows per color) 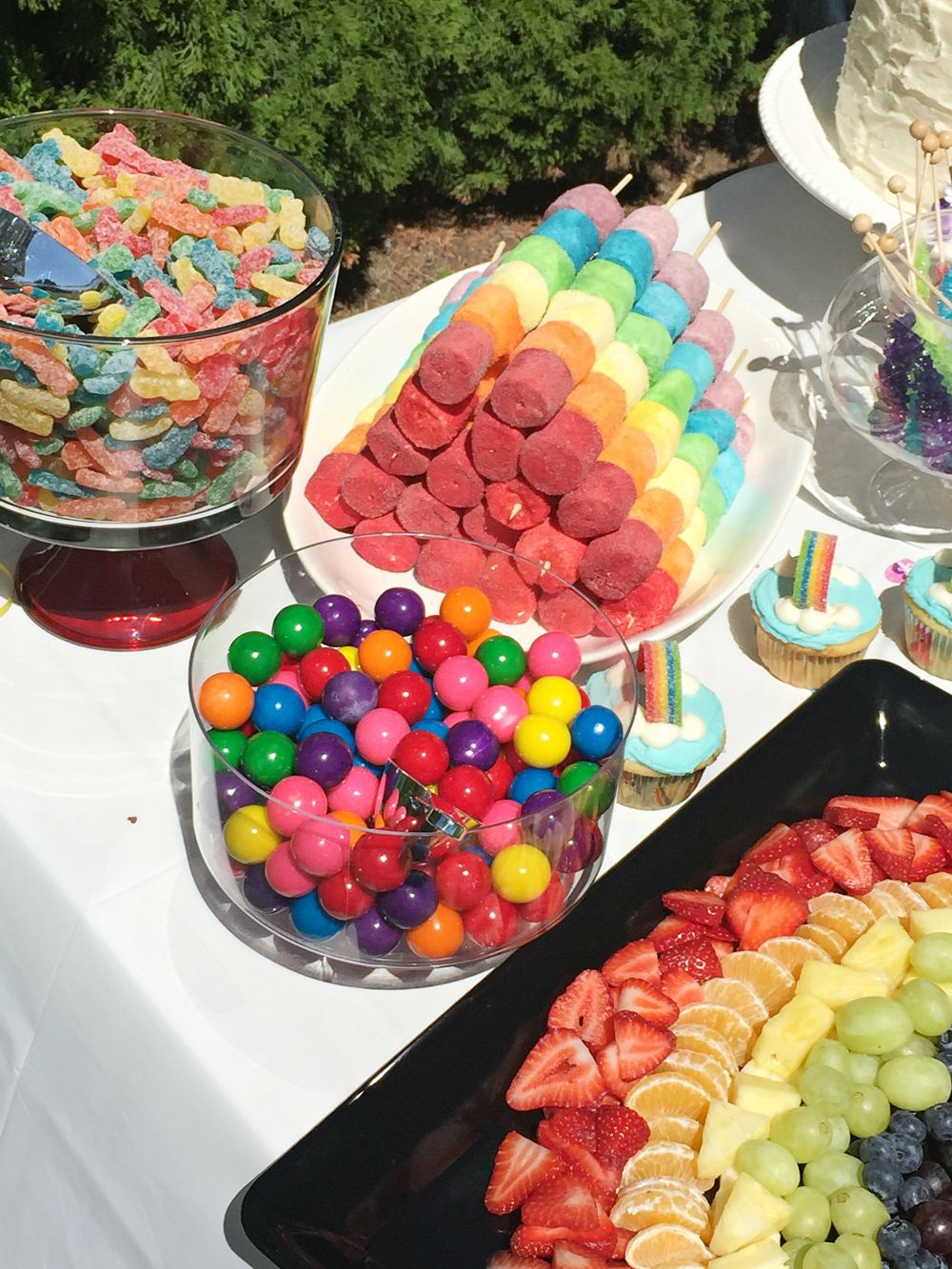 let’s talk about the only healthy part of this party! The RAINBOW FRUIT TRAY! What what!

in case you can’t see or figure out all those fruits on your own… let me break it down for yea.

strawberries | tangerines | pineapple | green grapes | blueberries | red grapes | and more mallows (those are not a fruit, in case that confused you) 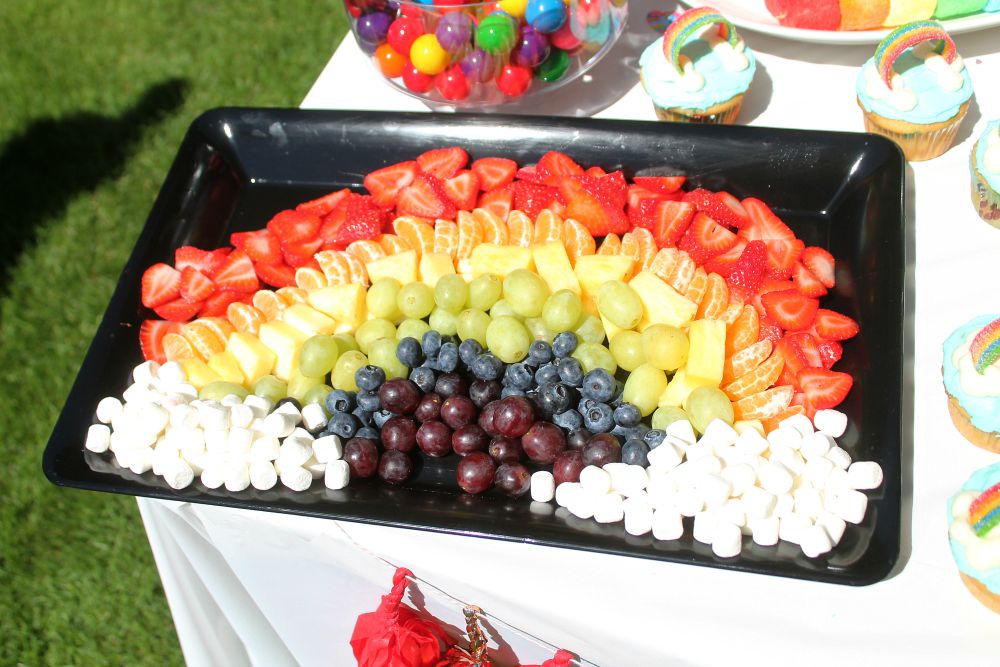 tomatoes | carrots | yellow peppers | broccoli (what’s the plural word for broccoli?) | cauliflower (I don’t know this one either…) | olives

so fun. so cute. so healthy. 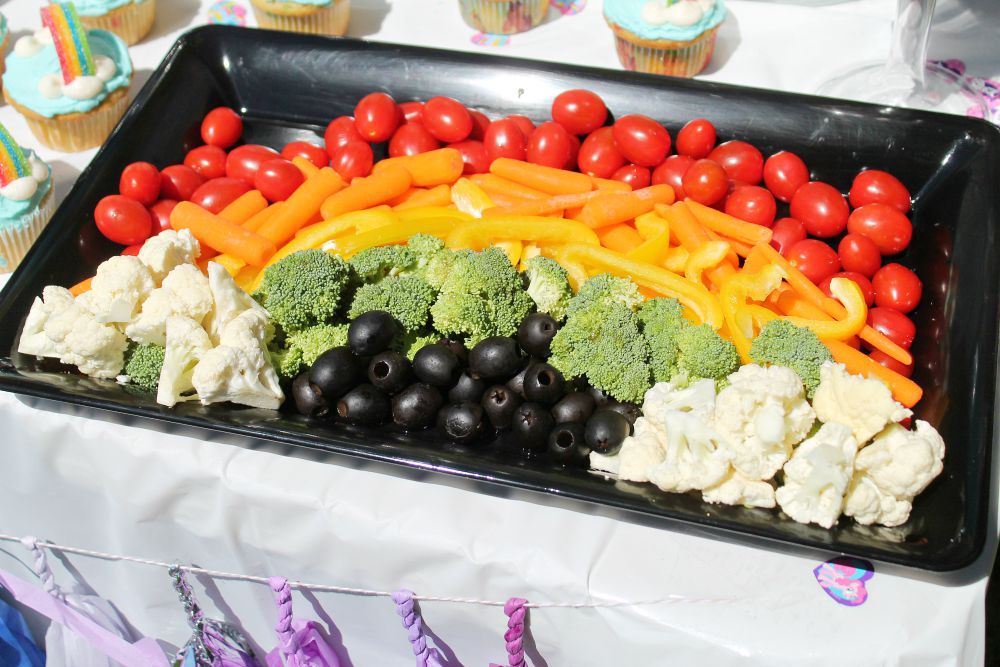 WHAT THE JELLO SHOTS?

Was it worth it…I don’t know, they DO look really cute on that table soooooo

I will let you be the judge of that! 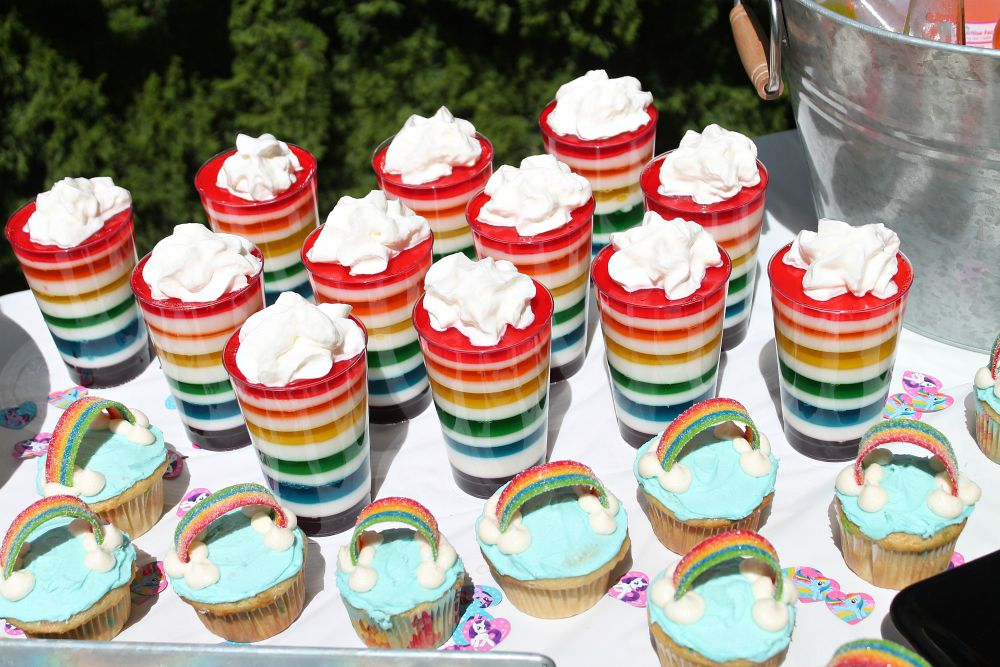 hmmm let’s do the rainbow cupcakes next… I was so original and came up with these all on my own.

HA! Just kidding. But I did find the rainbow belts at my gas station! They are just the SOUR PUNCH sour ribbon candy. #winning 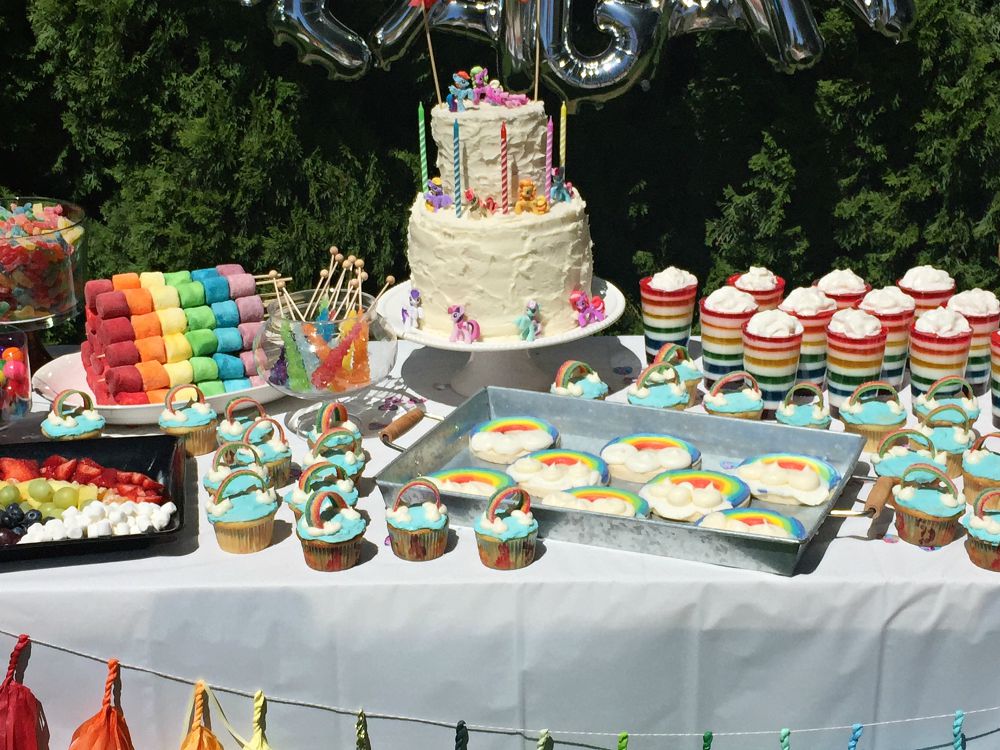 no, the frosting isn’t weird…

no, it didn’t melt on the 11 hour drive to Washington…

no, they didn’t squish each other…

no, I didn’t try to fix them with more frosting only to ruin them some more…

If you look really closely the one lone ranger in the middle made it through the drive. Just imagine they all look like that okay?!?

What I am saying is they are delicious and adorable. #winwin

The FIX in Draper, UT made them for the party. They were awesome to work with, affordable, and delicious (have I said that yet?) 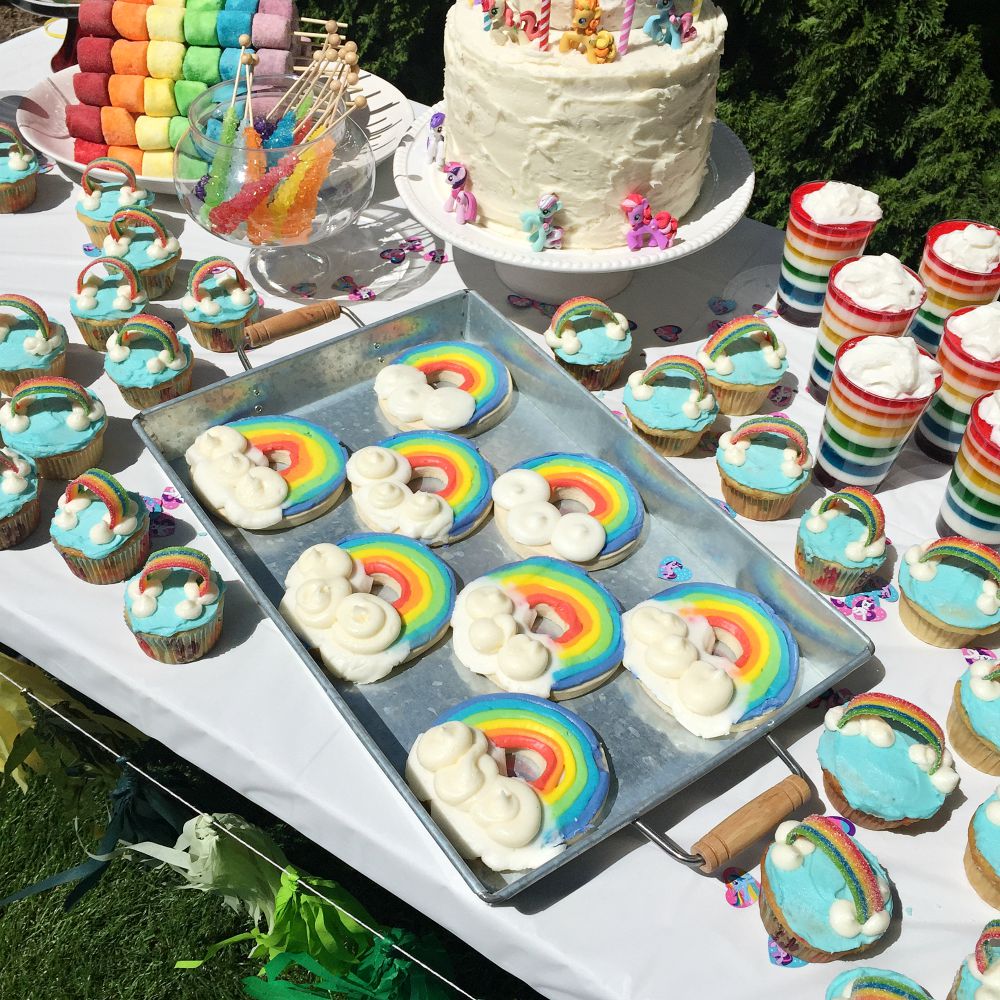 LAST BUT NOT LEAST

Oh, and all the containers and jars are plastic and from ZURCHERS too #obvi 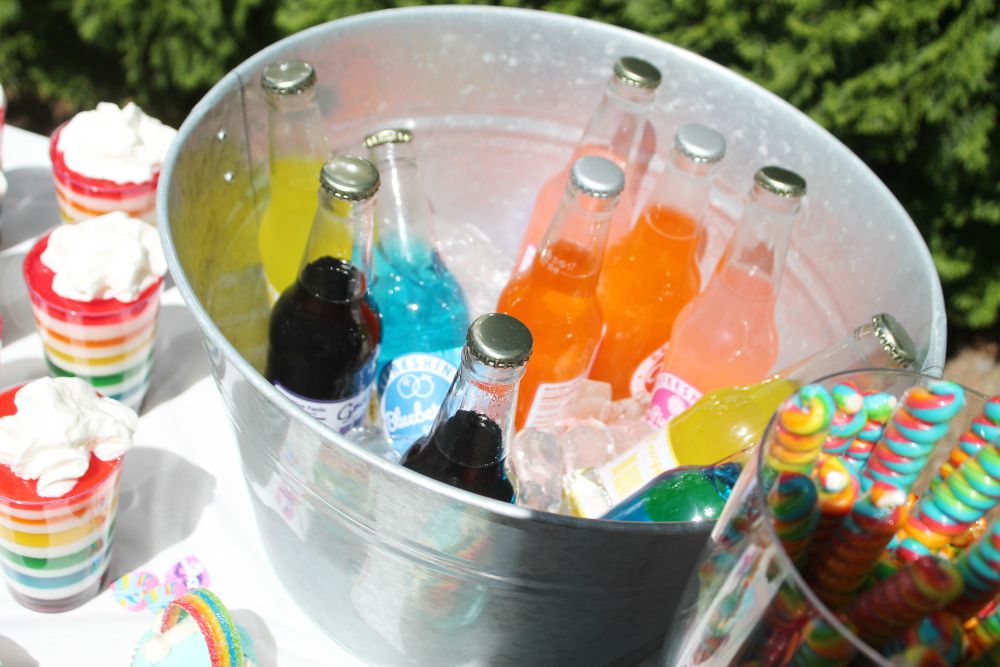 that bomb custom made party crown from THE PINK RAFFY 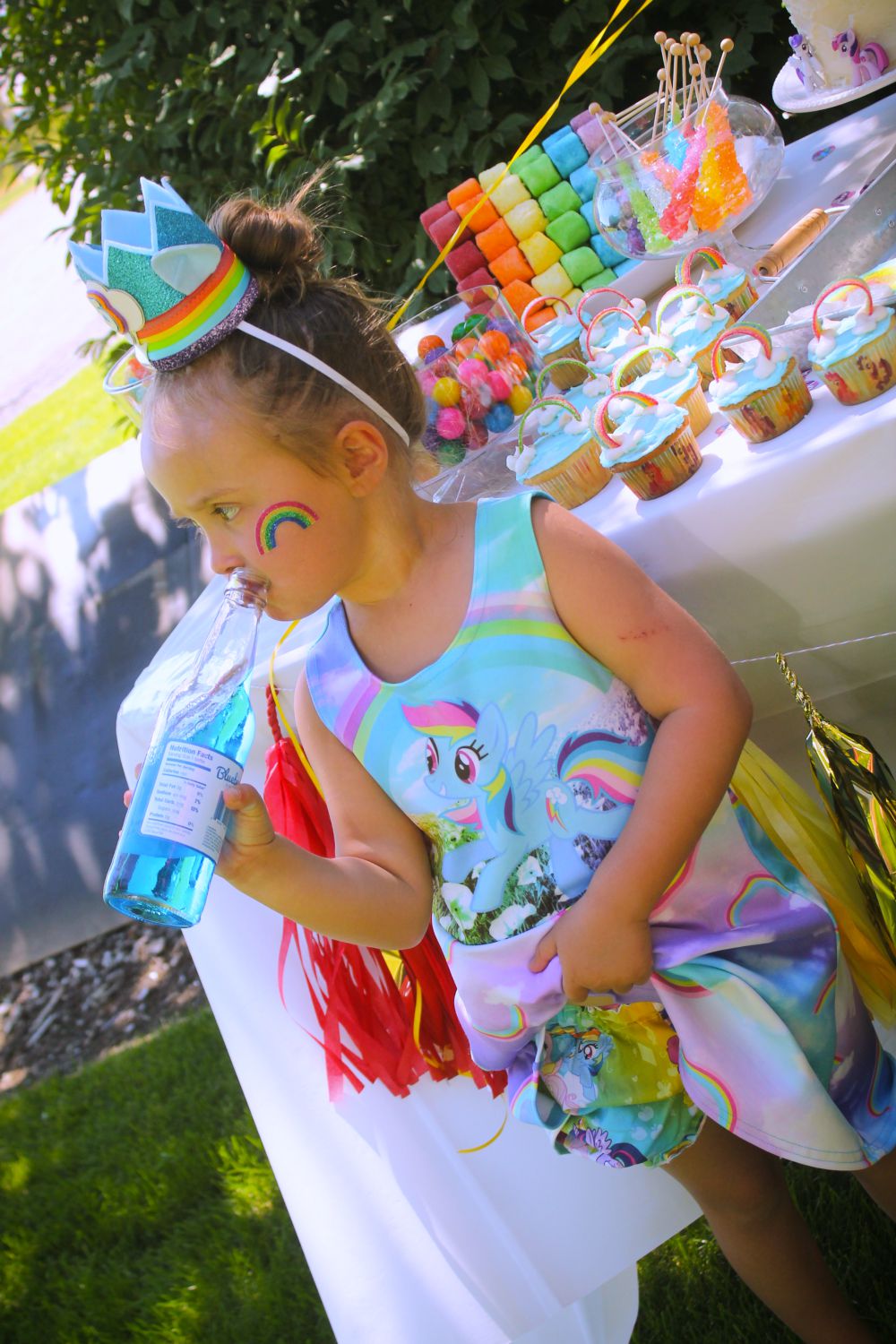 Have I talked about that rainbow tassel garland? Uhhh HI! It’s from GLAMFETE too. I told you her Etsy shop is to die for! 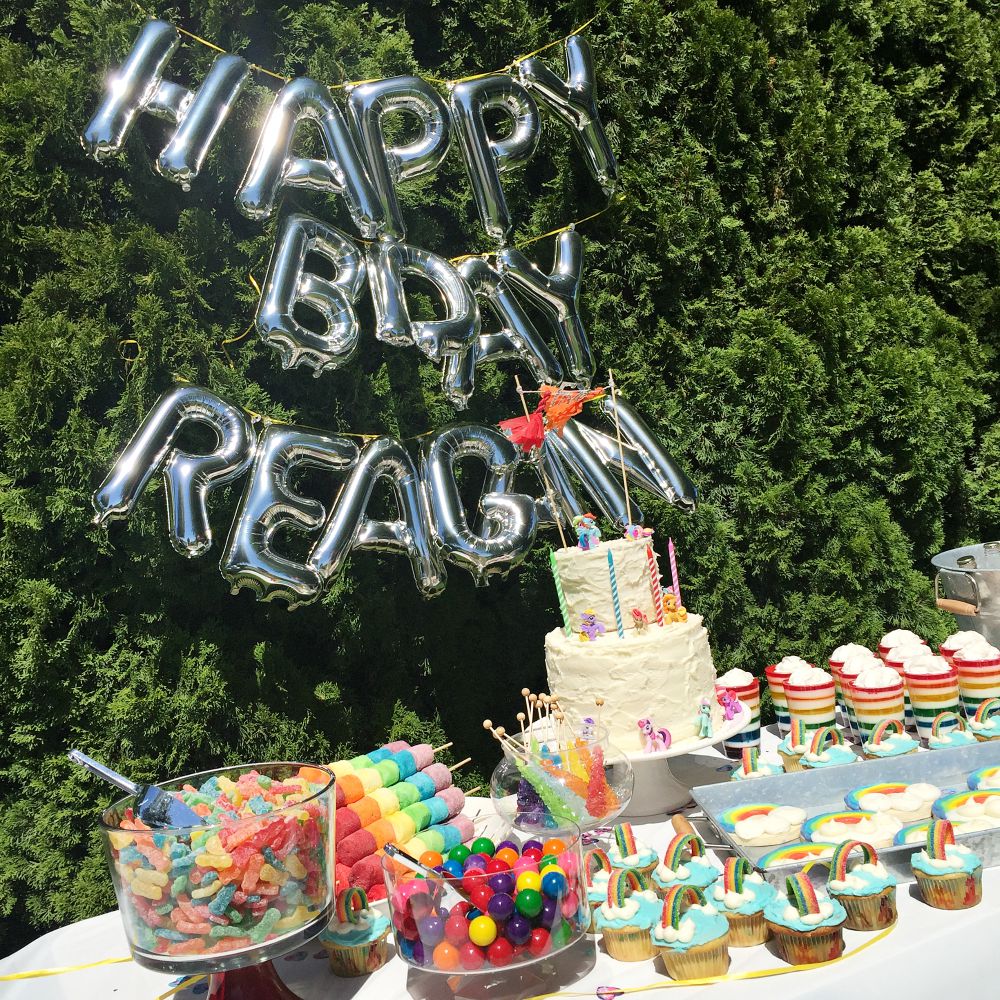 NOW, onto the PARTY TABLE!!

Where I got everything from ZURCHERS #obvi 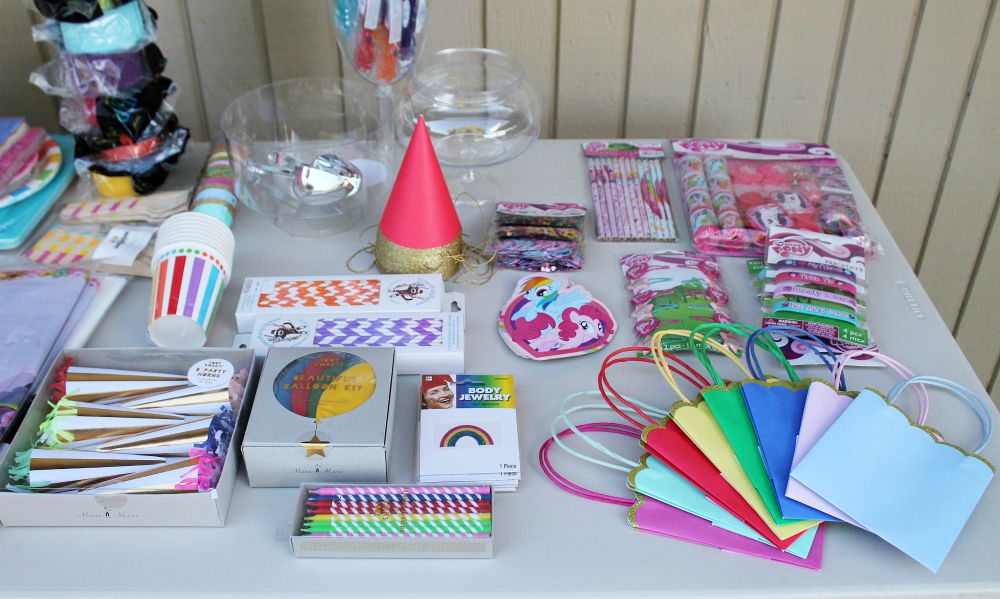 NO party is complete without party favors!

Here is the secret about party favors…

Party favors are like THE PLACE to fill the cheesiest most amazing character toys and pencils and hair clips and bracelets!

AS long as the kids get to take home all the My Little Pony character essentials, that is all that matters. 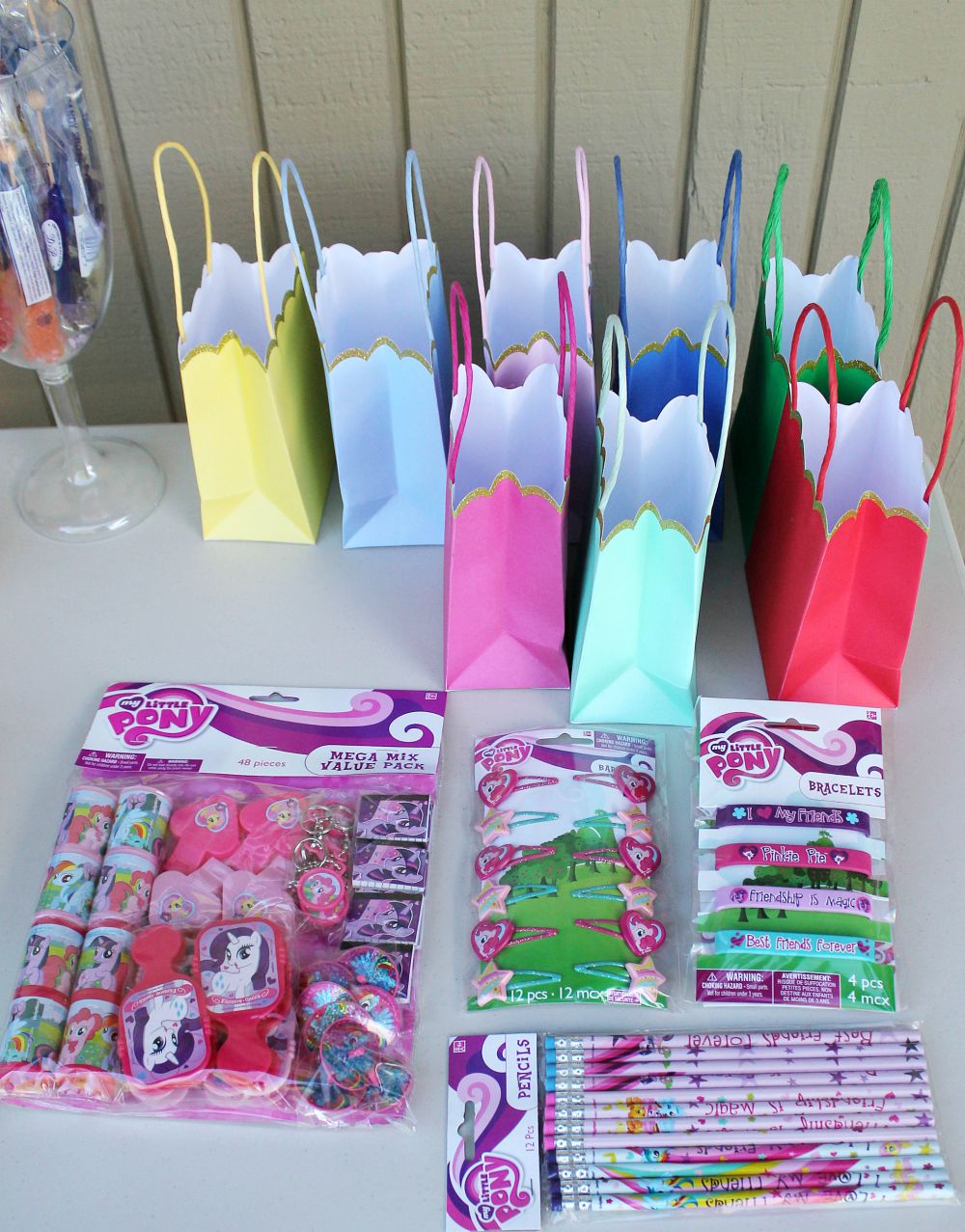 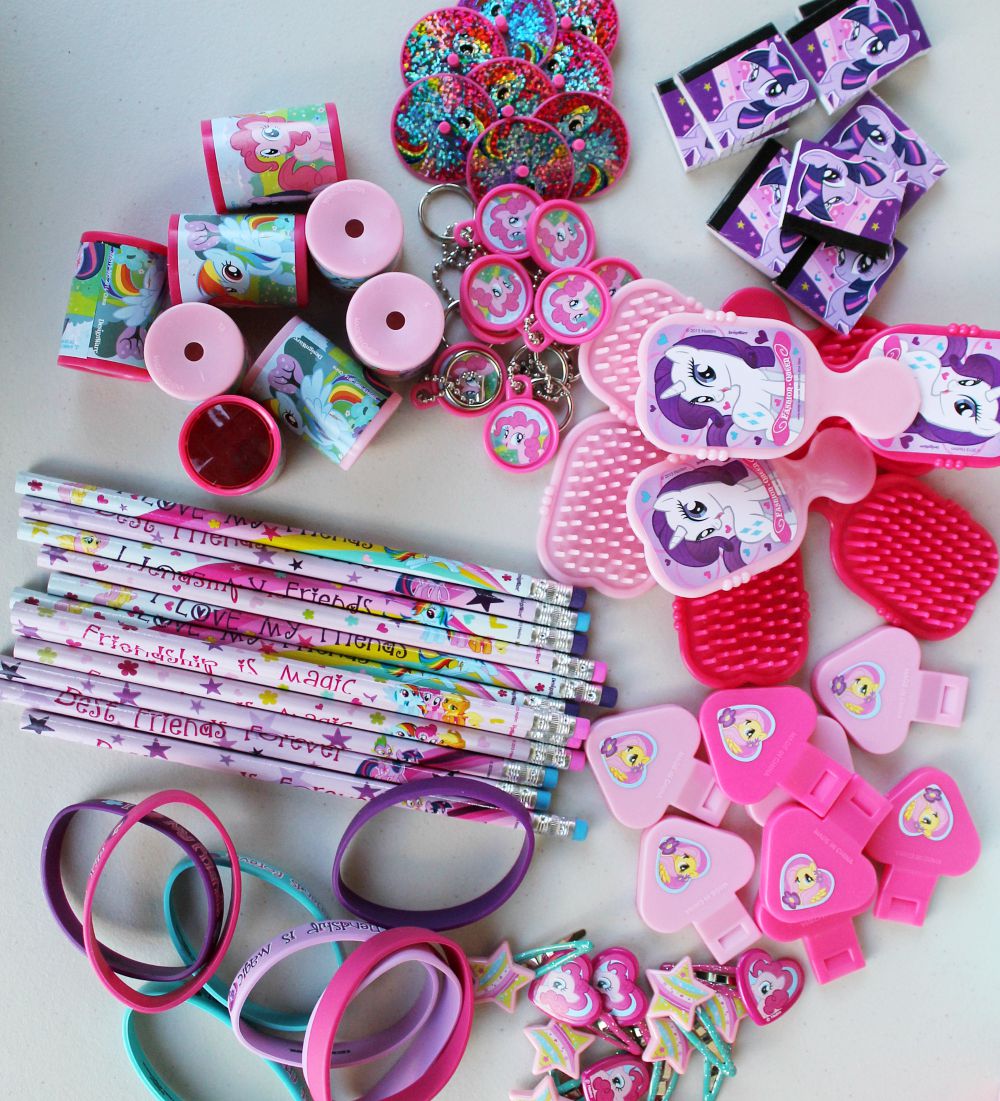 I placed the bags filled with cheesiness on their chairs and made sure each chair was dressed with a fun pair of PEGASUS wings! 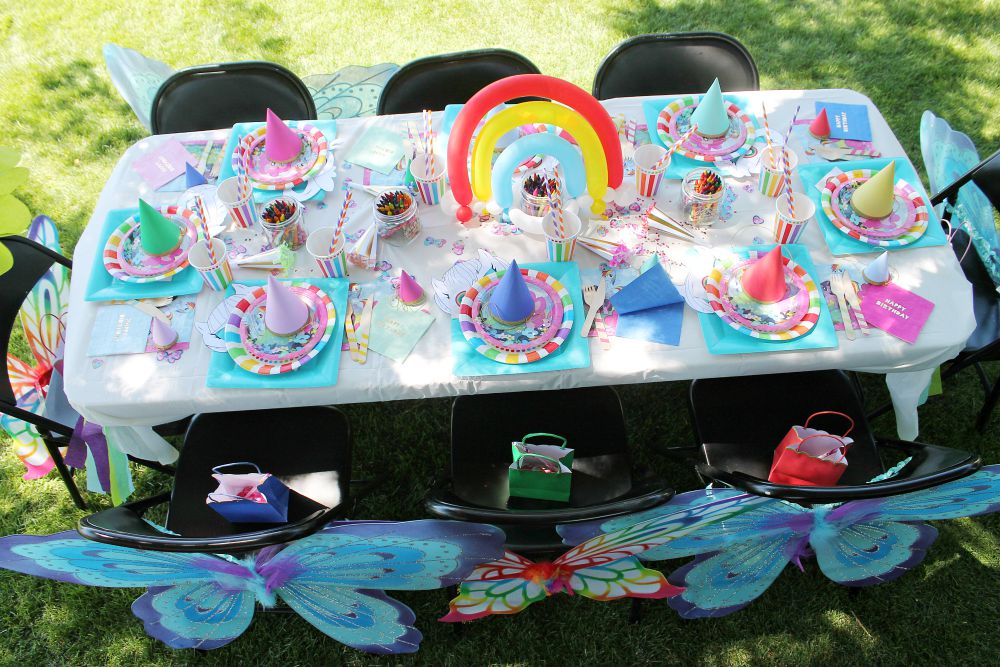 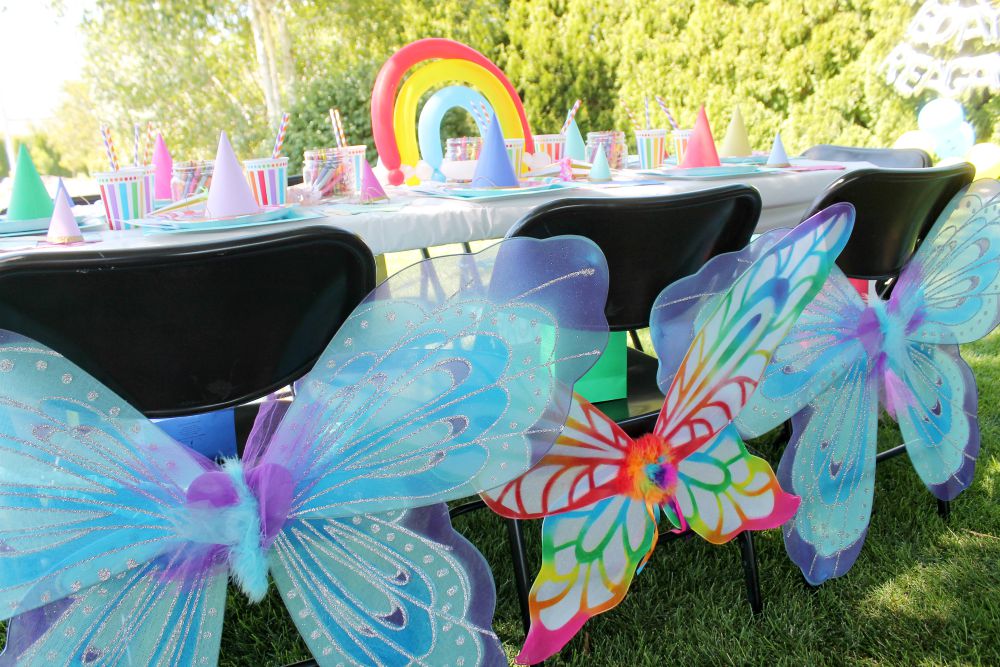 To decrease the cheesiness of the character plates and napkins. Okay, wait. That sentence sounds insensitive…errr something. Let’s try that again…

To make the My Little Pony plates and napkins pop with even more awesomeness, I layered the plates and added some cute gold foil napkins on top. Simple party hats with gold glitter add a fun touch too, especially when they are in mini size! 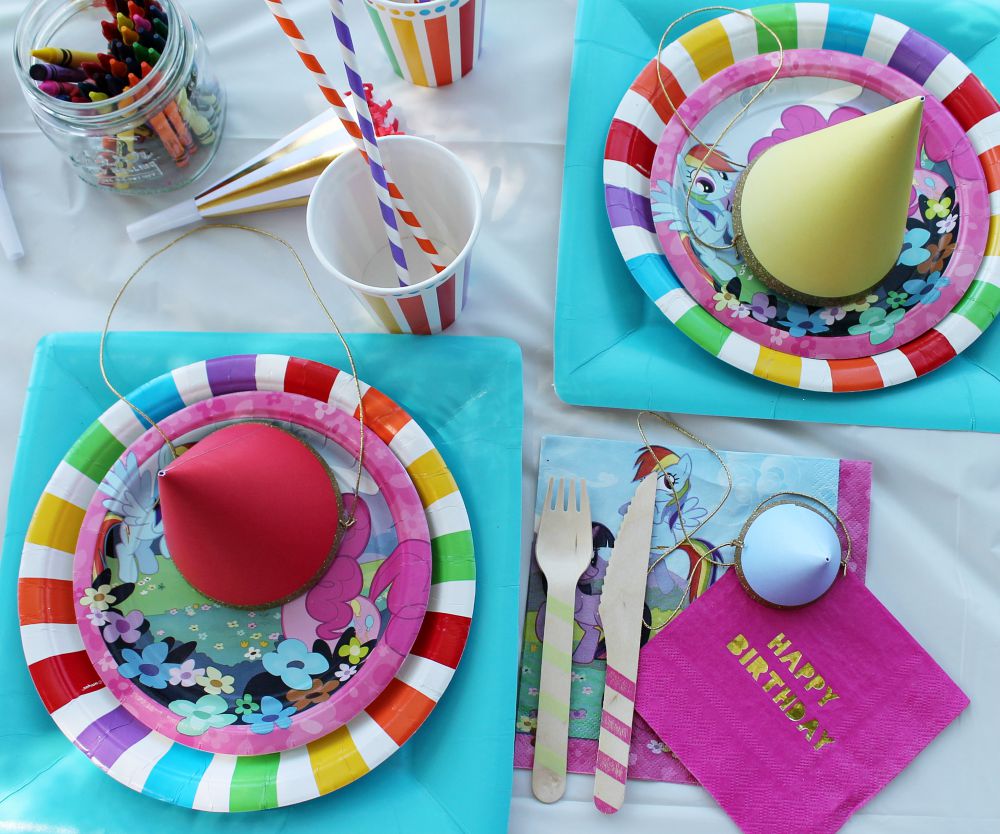 Add some colorful paper straws, some decorated wood utensils, My Little Pony confetti, and party horns and you have yourself a seriously awesome party table! (All of which can be found at ZURCHERS) #obvi 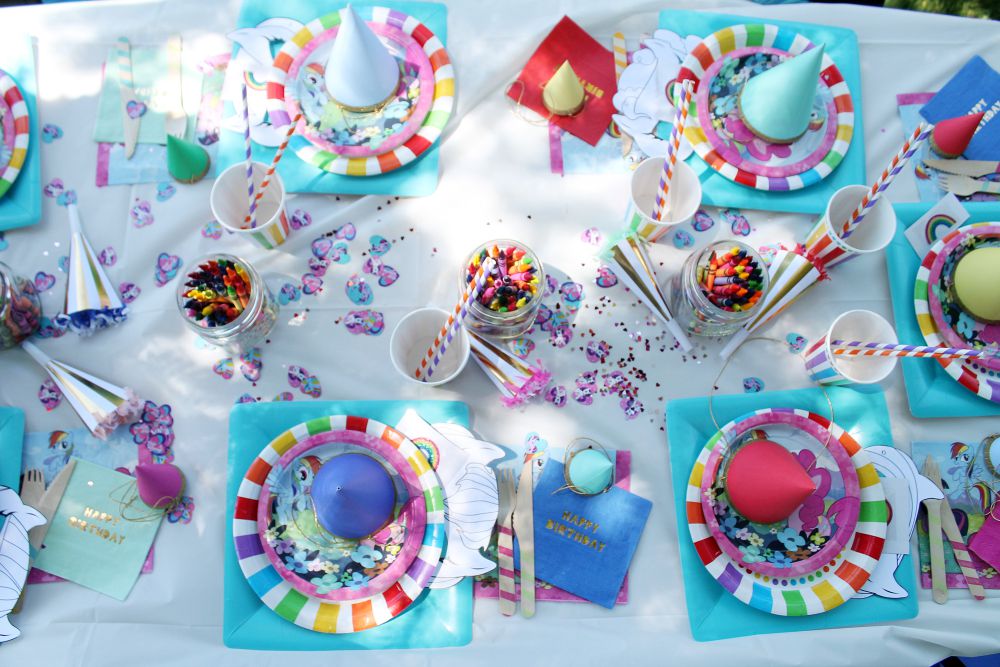 I finished off the table by adding some mason jars filled with crayons (which I would buy RIGHT NOW because they are so cheap) and fun cut out MY LITTLE PONY masks! FIND THE PRINTABLE FOR THE MASKS HERE

While they colored their masks, I went around to each kid and found out their pony name!

print off the “NAME GAME FOR FILLIES” here 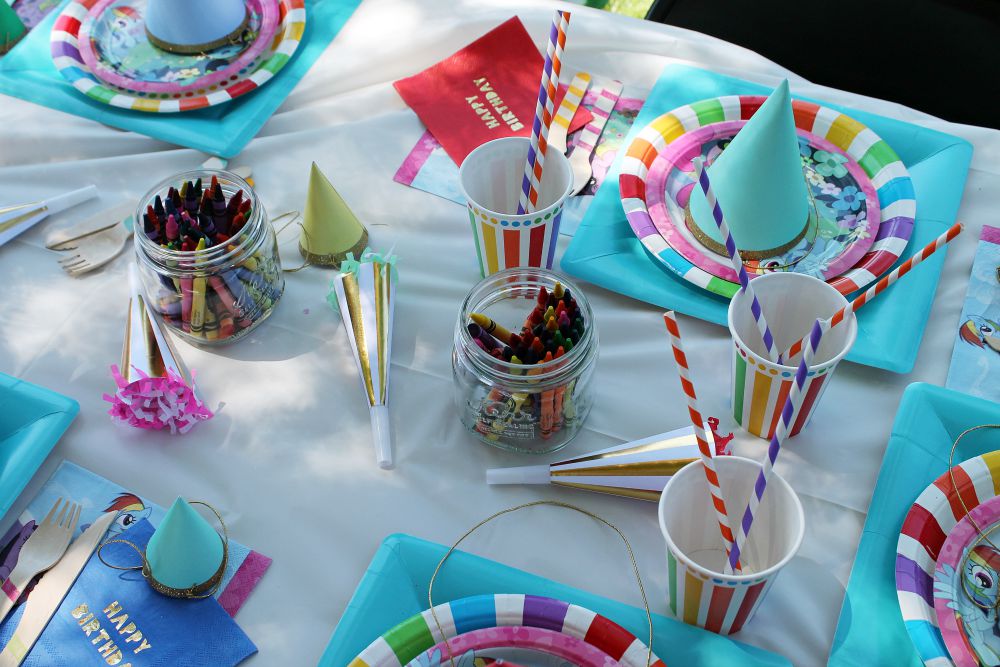 A rainbow sticker for their face, a pony mask, a pony name, and pony wings. 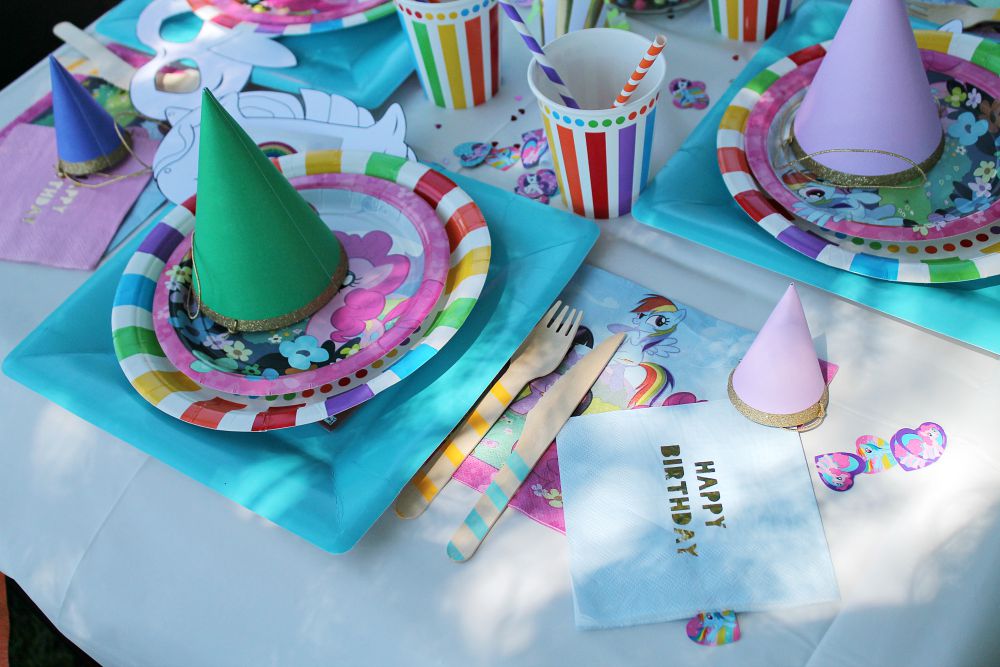 Here is the list of the other games we played!

PIN THE CUTIE MARK OF THE PONY (kit for game available at ZURCHERS.COM

FIND THE RAINBOW (throw a bunch of Skittles all over the grass) whoever finds all the colors of the rainbow first, wins! #yay

AND we had a sweet PONY PINATA (found on ZURCHERS.COM)

We also put up this amazing, ginormous My Little Pony photo booth that you can buy from ZURCHERS, but we didn’t even take pics in it. How dumb is that? Like it would have been so cute with their masks… ugh! #fail

We didn’t get through all the games because the kids wanted to go swim in the pool but they would have all been so fun! I just know it…

A party isn’t complete unless you have decorations hanging from the ceiling, or in this case, the tree!

Rainbow Dash balloon and all tissue paper decor from Zurchers! 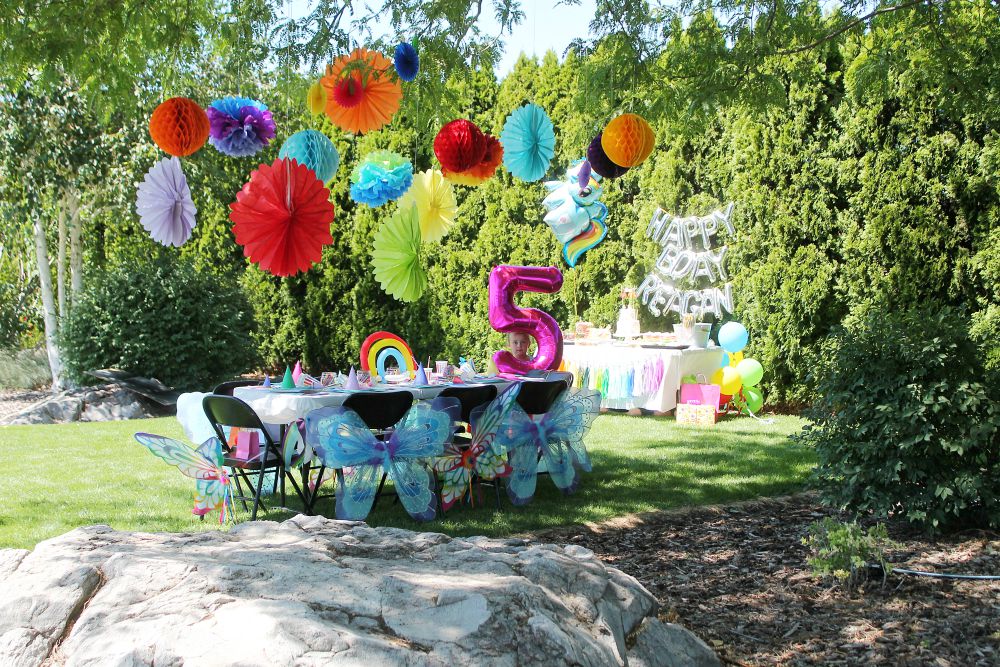 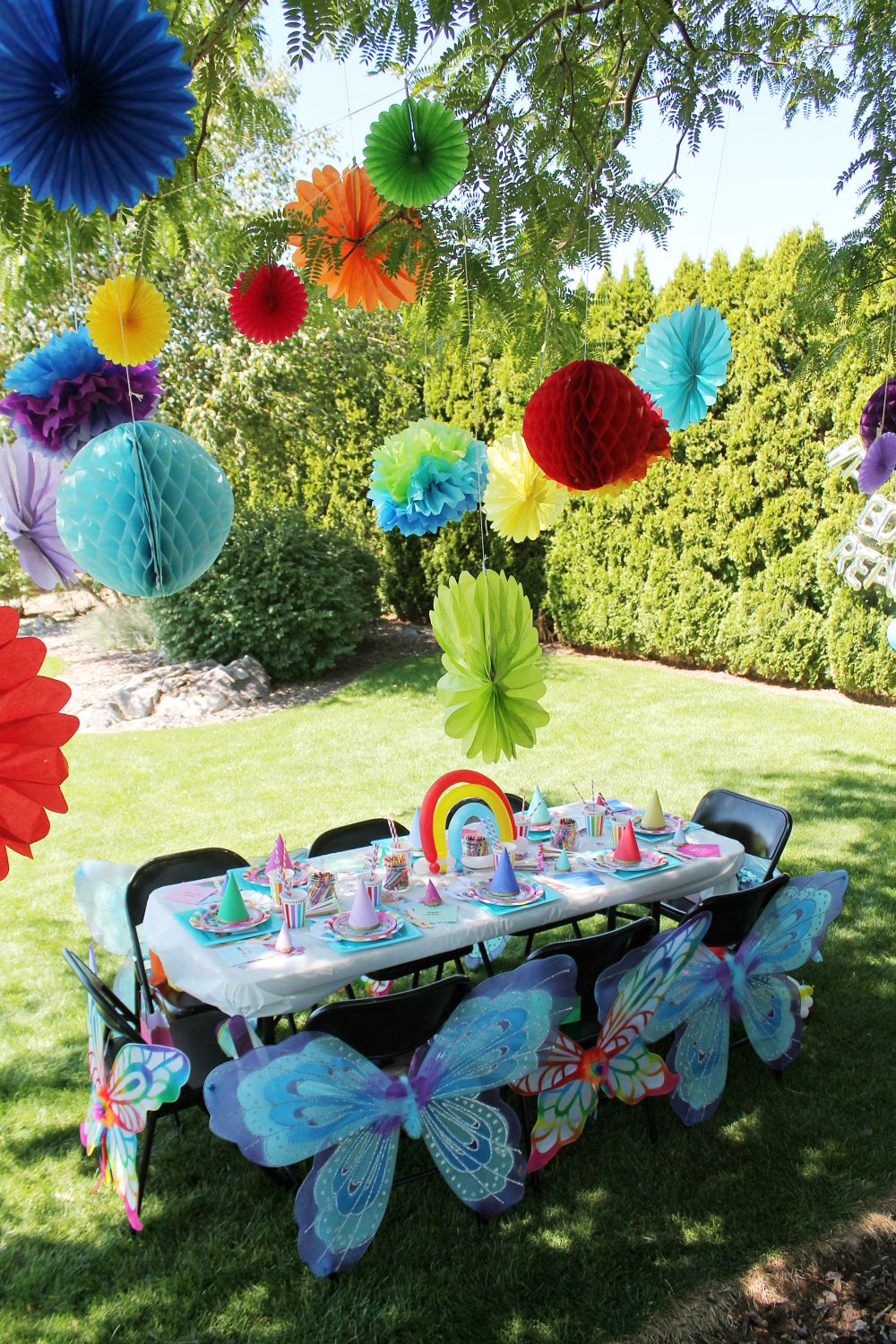 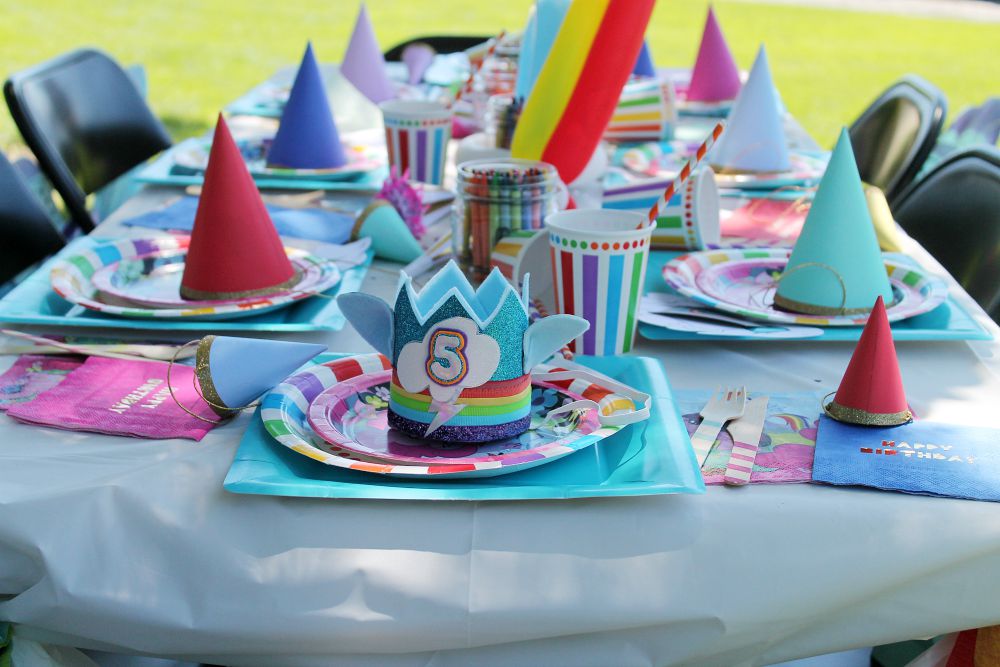 Other than the annoying wind that made it really difficult to take pictures, the party went amazing and was so easy to place together…

I mean, after I finished my rainbow jello and rainbow cake. #ridiculous #worthit

HUGE thanks to family for helping me set everything up!

OH, and thanks Reagan Jane for being born so that I could throw this party.

0 Shares
« casual friday – fashion
Affordable, trendy, supportive, and fun… everything you want out of your sports bra! »

When hardship and trauma arise, you enter a cocoon

“Moon dust in your lungs, stars in your eyes, yo

Weekend photo dump from our first ever couples vac

When you are old and wrinkly, sitting on your porc

One of my youngest memories I have as a child was

I’m just really glad we still have time to hang

When hardship and trauma arise, you enter a cocoon

“Moon dust in your lungs, stars in your eyes, yo

Weekend photo dump from our first ever couples vac

When you are old and wrinkly, sitting on your porc

One of my youngest memories I have as a child was

I’m just really glad we still have time to hang