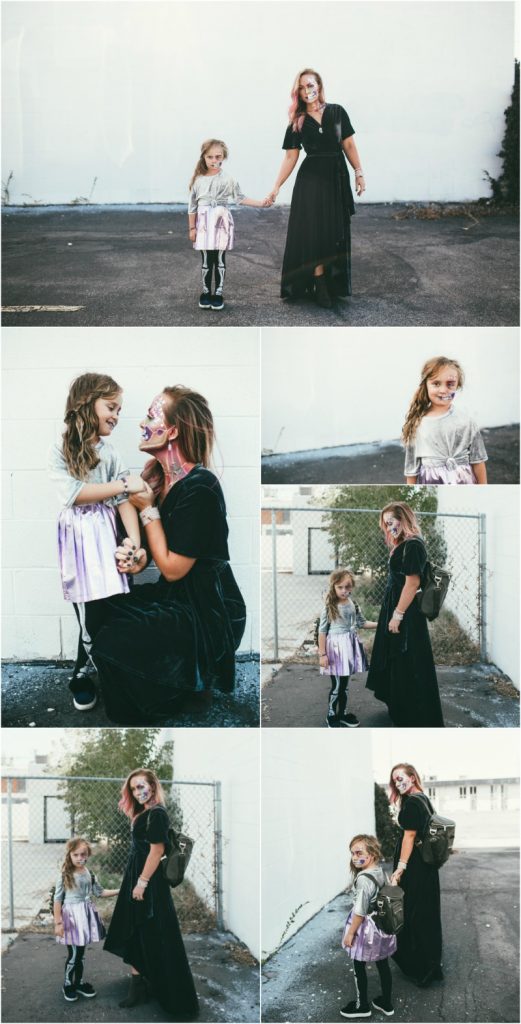 Reagan Jane and I had the best time on our first HALLOWEEN MOTHER-DAUGHTER look back in 2015. How could I not do it again?

I am still kicking myself for skipping last year’s look…I was feeling less than inspired with my pregnant-ness (I made that word up) and talked myself out of doing it. #whysadie

So, it’s a done deal. No more skipping years. This is officially a tradition for Reagan and me, and I can’t wait to see all these photos compiled together when she is older!

Let’s talk about how hilarious Reagan is in these photos, though. She really knows how to get into character. Apparently, skull=pissed to her. HA.

Also, funny side-note, Reagan had a gnarly black eye from hitting her eye on our tree-swing just a couple of days before, so we painted that side of her face. But, if you notice, we both have the same side of our face painted, so it wasn’t as “aesthetically pleasing” in the photos. In my defense, my hair-swoop had to be on the right side; it just doesn’t swoop as well on the left, and you can’t have the hair-swoop and the makeup on the same side. The skull had no other choice but to show itself on the left side. #doitfortheswoop #themoreyouknow

This look was so fun and a bit more out-of-the-box than what I would have normally considered doing with my 7-year-old daughter, BUT throw some stars and gems on a skull, add in some rainbow colors, and you’ve got yourself an all-ages appropriate skull makeup look. #alsothemoreyouknow

Jill did such an exceptional job on the makeup! She and I had been sending each other ideas for months, and I immediately knew I wanted to recreate this look the second I saw it. I linked the eye-shadow palette that she used for almost all of the color below. Jill was a trooper and bought all the different stars and non-makeup materials at Michaels. Even the diamond teeth.

Diamond? Probably more like rhinestone? Or, plastic gem? What about fake awesomeness?

Reagan is head-to-toe TARGET! (all linked below–just scroll over)

My dress was purchased last year, but I’ve seen the identical one on a couple of different boutique sites. I’ve also linked a few velvet dresses below. My shoes are linked below, too.

0 Shares
« TRIBUTE CRUCIBLE 2017- never forget!
A deeper Insight to our health and fitness with Helix! »