What happens when two strangers stand in line by each other?

The answer is, nothing.

They stand there and look at their phones or wrestle with their subconscious about something that happened that day.

They furrow their brows, fold their arms, roll their eyes, or stand there in silence. 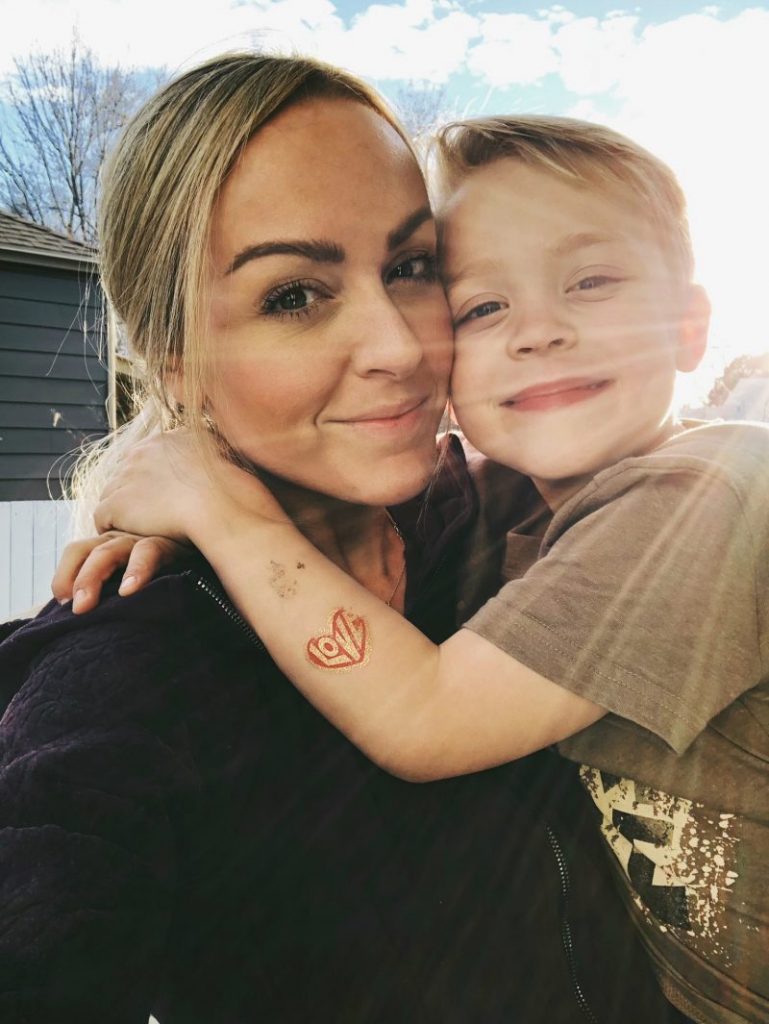 Now, what happens when a 5-year-old stands in line?

They flip and flop and hang and jump and stare and smile and point.

Five-year-olds don’t have pressing matters or issues that consume their life.

Who knew that that was all it took?

To save a life.

Everything that brought us to that moment . . .

Baylor had been particularly hard that week. His room was being remodeled, so he slept on his sister’s floor. He needs routine, and that’s been slightly lacking for him. It was the week of Valentine’s Day, and Jeff and I were going to be gone a couple of nights on different dates. He’s been really good about us leaving, but he struggled that week. Crying and anxious. I told him I would take him on a date that weekend to make up for it. He brought it up to me every hour until Friday hit.

When Friday arrived, we were off on our date, but not until after we were held up by 30 different random things. His request was Target and dinner, but when we arrived at Target, he had fallen asleep in the car. This just does not happen. Ever. I got some work done and finally woke him up after 30 minutes. We shopped our hearts out, and I bought him a couple toys. “This is the best date ever,” he said.

Soon we made our way to dinner. After talking with some friends we ran into, we found ourselves standing in line behind a very tall dude with a really cool jean jacket. (Literally everything we had done that day, maybe everything we had done in the last few years, had brought us to this point.) Baylor was jumping and bouncing and noticing and observing while I was trying to keep him calmed down and away from people’s space. I just kept thinking that these people without kids probably just want to be left alone and especially don’t want little kids all up in their personal space.

I soon noticed Baylor smiling and staring at the dude with the cool jacket. I had a decision to make at that moment. Do I allow him to stare and observe, or do I quickly tell him that it’s bad manners and not to stare? In one corner of my mind lies a tired stressed out mother who doesn’t want to deal with anyone or anything. And in the other corner lies the mother who wants to heal and help and serve. It was clear to me that Baylor liked the jacket and he just needed a little reinforcement. I’ve noticed that with children, if they stare and see something “different,” they often don’t know exactly how to handle that “different,” which is where parents come in. They can literally shape the way children think and act, and if you can redirect the way that staring is processed, you can mold your child to be open and loving and nonjudgmental. So, I told Baylor, “Do you want to tell him you like the jacket?”

While shaking his head yes, he shyly stated, “I like your jacket.”

“Well, thank you,” the dude with the cool jacket replied.

The corners of his lips turned up, and there was so much kindness behind his eyes.

The next thing I knew, he was paying for our meal.

I was shocked and so grateful.

The cashier put us on the same ticket, so we awkwardly got our drinks and utensils together and found a place to sit. Baylor and Tony, the dude with the cool jacket, soon started to talk about art and creating. He told Baylor that anything his hands touched was considered ART and he should never ever stop creating. He said, “Art is created to bring happiness, whether it’s for you or for someone else.” Baylor was clearly touched by this young man and said, “I want to be an artist like you someday.” With tears in his eyes, Tony reached for his phone to share something with us. “I deleted my social media accounts earlier today,” Tony said, “but I want to re-upload Facebook so I can show you this video.”

I handed Tony my phone to use, and he navigated himself to his Facebook page. After he shared the video, I immediately followed him on Facebook, which was random of me, but I did it without thinking. Like I just needed to be friends with him.

We said thank you and goodbye when, really, I just knew this wasn’t goodbye.

Answering a cry for help

Later that night, I was putting the kids to bed when I received a Facebook message from Tony.

I was shocked and emotional and so moved.

Tony was reaching out for help. He was aching for interaction and love. He paid for a meal, made a 5-year-old’s night and completely changed his stars. I knew I couldn’t leave this story alone. I had to tell my readers. I had to beg them to speak out. I had to start a movement or share or something.

But while I was sharing with my followers, Tony had hopped back onto social media to share the experience with his friends. Friday night we knew we had to share and so did many others. Soon thousands of people flooded Tony’s feed with love and kindness.

We texted the majority of Saturday as I asked Tony more about him. I learned through his Instastories that he was LDS, but I didn’t know the extent of his story. I knew the second we exchanged conversation over Facebook messenger Friday night that this wasn’t going to be a one-time encounter. I wanted to get to know him. I had to. I was so intrigued and curious. I just knew something was special about his story.

Tony’s mother and father emigrated from China to Suriname, where he was born and raised. He was forced to watch his father physically abuse his mother his entire childhood. He was not only physically abused but emotionally abused and neglected alongside his mother. His mother divorced when he was 12, and he dropped out of school when he was in 8th grade to help his mother in her clothing store and to get away from all the bullying. He had no social life and struggled with nightmares of his father that led to severe depression and suicidal attempts.

After a failed suicide attempt at age 19, he decided to make something of his life in America. He moved to New York just 5 years ago and then California where he met the Mormon missionaries. He soon after served an LDS missionary back in New York. His mother had cut all contact from him after he become a member of the LDS church, and soon the rigors of the mission and his struggling mental health became almost too much for him. He had nowhere to go and no family to turn to after his mission, so he decided to stay in New York City.

Life became lonely for Tony, and mental issues and repressed memories were left unresolved. He slowly slipped away from religion and found himself in a sea of drugs, alcohol, and suicide. After multiple attempts and 4 huge ER bills, he found himself broke and homeless. He reached out for help on Facebook one last time, and a friend from California said he had a couch he could crash on in Salt Lake City. That was 2 months ago.

Since then, he has had good and bad days. He wants to find happiness and sustain a job, but how do you do that when you don’t even know where to begin? His camera and his art have saved his life multiple times, but it wasn’t going to be enough. In fact, right before we had come up in line behind him, he had been standing in line and was listening to a group of boys behind him making fun of him and his jacket. “I was going to cry,” Tony said, “but why waste the tears? I wasn’t going to be alive in a couple hours anyway.”

But Baylor spoke up. He acted. He loved.

Everything happens for a reason

After Tony told me his life story yesterday, I knew this couldn’t be over. I just felt as if I had found a long-lost brother. A boy who has fought so hard for so long. On his own. With no family. No parents. After discussing it with Jeff, we decided to invite him to church that Sunday and to our house for lunch afterwards.

Jeff had been asked to speak on JUDGING OTHERS just two weeks before that, and he was planning to use the story of Baylor’s courage, so it was the perfect sacrament meeting.

After church, Tony came home with us, and we sat and ate for hours. Turns out, Tony is pretty brilliant. He’s received his GED since being in America, and he knows 3 languages! He’s been broke but never in debt, and he has passions and desires and drive. He just loses hope. Like any of us do. Except when we do, we have people to turn to. People to cry with. Family to love us and help us.

We talked about manifestations and the universe and all my hippy goodness. He didn’t understand the word manifestation, so I explained what it meant: “We are creators, Tony. We can create the life that we deserve and should have. You just have to declare it.”

He then told me that just 3 weeks ago, he was going to play basketball with his roommate at a church house near the University of Utah. There was something unexpected happening that night, so they changed the location to a random church Tony had never been to. He had been struggling going to church for multiple reasons, but one of them was how dull and simple the new church buildings were. This particular building they randomly came to play ball in was “magical.” It was older with stained-glass windows and metal doors with arches and steeples. He didn’t want to play ball anymore. He simply wanted to admire the building. “If I could come to this building, I would go to church every week,” he said to his roommate. “Actually, someday I will come to this church building.”

He couldn’t believe his eyes when 3 weeks later–just 32 hours after he almost left this earth–he was pulling up to that SAME church to meet us! (for reference-LDS church buildings are like street signs in SLC. There are literally hundreds of them)

Everything happens for a reason.

You can control your destiny!

I believe in manifesting. I believe in angels and guides and God and intertwined interactions. We were NOT meant to walk this world alone. We were not meant to carry our burdens alone.

I asked my readers to help me with Tony, help him out of his financial rut so he can find a job, get a bike, an apartment. I believe in him. I know with possible medication and hypnotherapy and exercise and nutrition help and meditation and wellness, I know he can heal from his repressed memories and scars.

We wrote down goals. We made a plan.

He’s coming to our house for dinner every week. He’s a part of our family now. 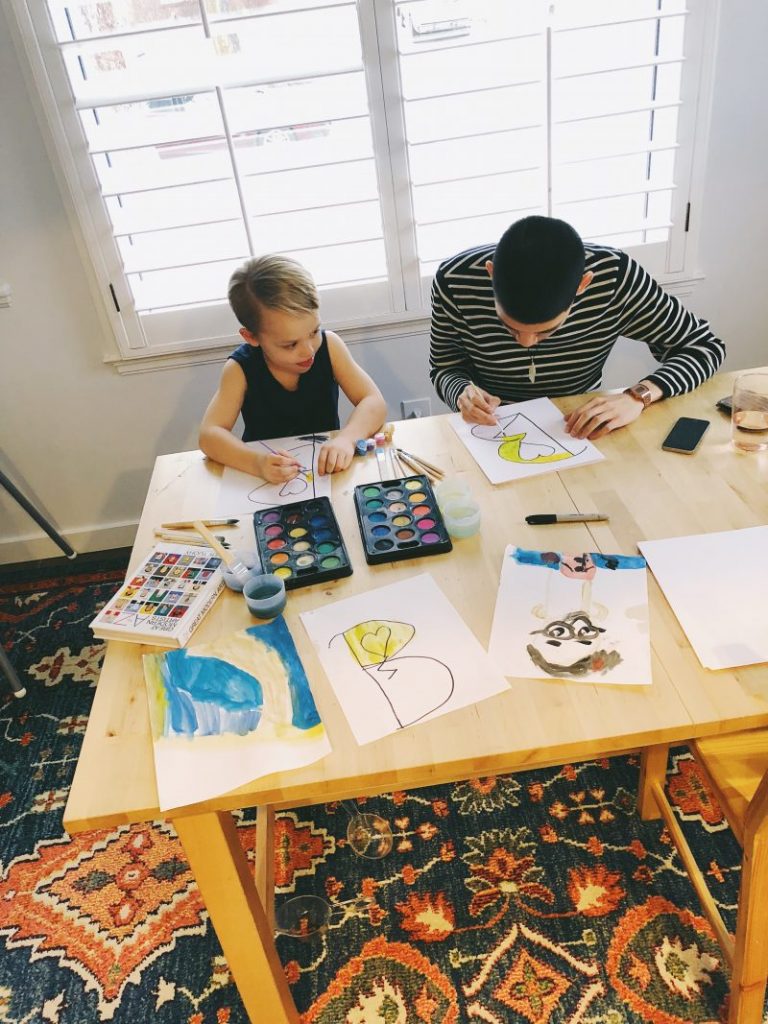 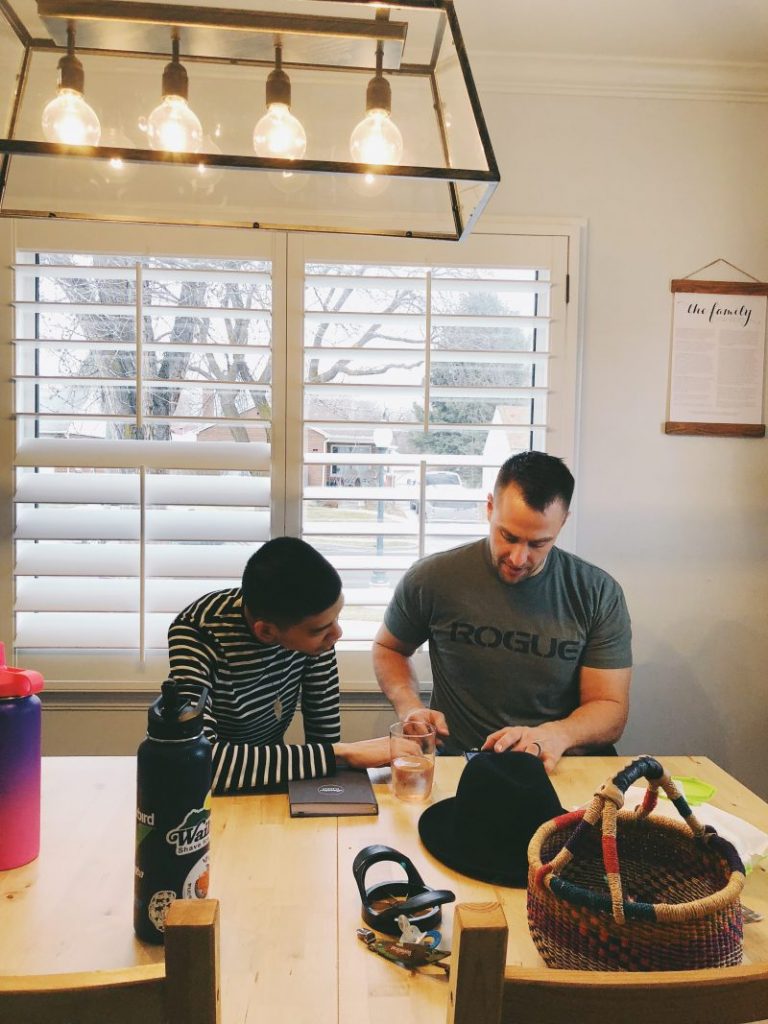 We surprised Tony with the money and a few gifts to help him start his journey. 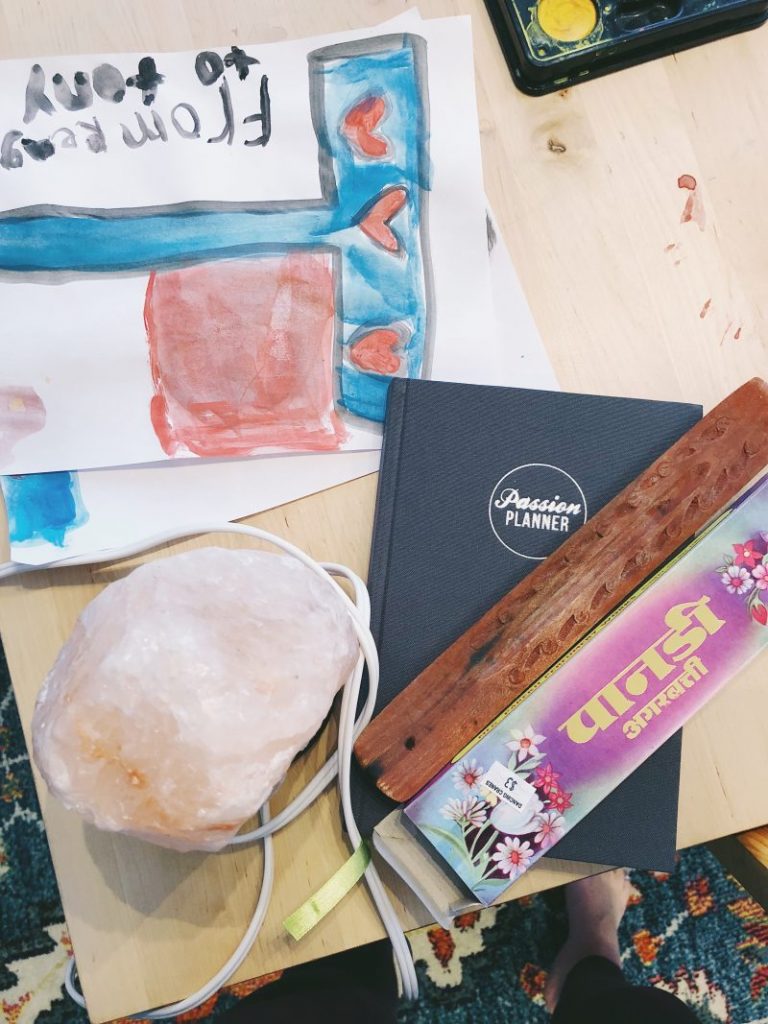 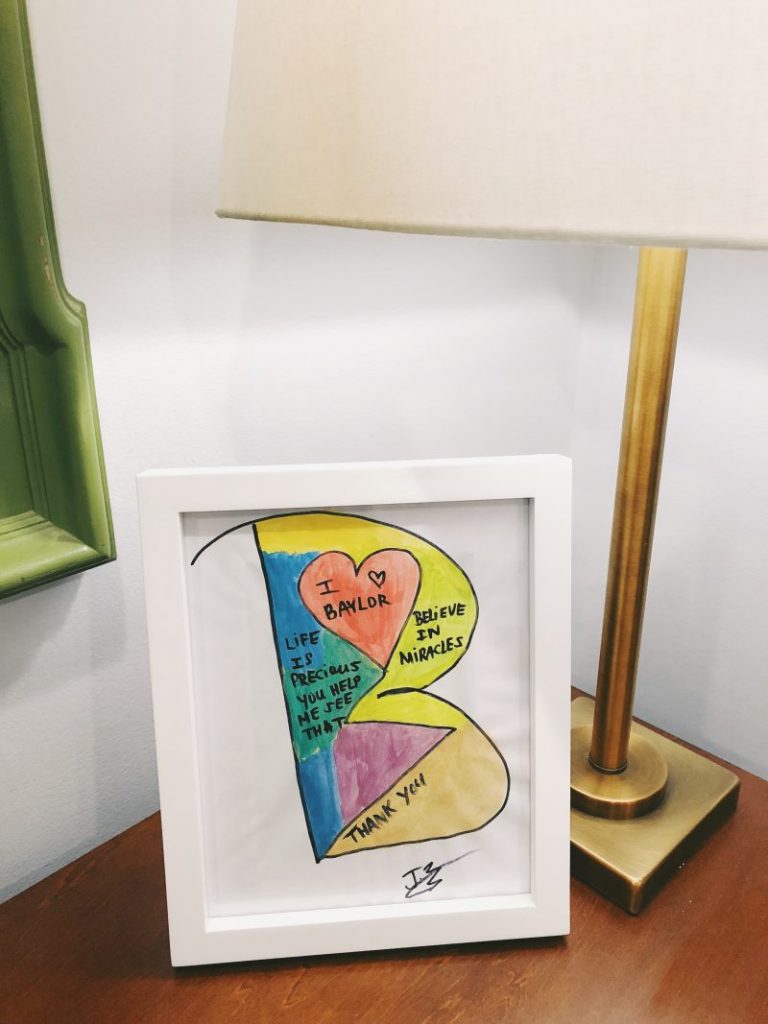 And he painted this picture in return.

IN A WORLD WHERE YOU CAN BE ANYTHING, BE KIND!